Trust me: he'll do to the U.S. what he does to Callista

The Man Who Would Be King, Newt Gingrich, has decided that the REAL problem in the Middle East is that we just aren't warry enough.

So he wants to

"Exercise a no-fly zone this evening. It’s also an ideological problem. The United States doesn’t need anybody’s permission. We don’t need to have NATO, who frankly, won’t bring much to the fight. We don’t need to have the United Nations. All we have to say is that we think that slaughtering your own citizens is unacceptable and that we’re intervening. And we don’t have to send troops. All we have to do is suppress his air force, which we could do in minutes."

All of which is true, and all of which means less than a zero in the calculus of national interests of which Mister Gingrich seems to care not a whit.

Does this idiot recall that, craptacular little Third World shithole that it is, Libya is still a Wesphalian state? That the very definition of national existence is the ability to prevent other people from flying around over your territory "without anyone's permission"?

Right now the Libyans are in the middle of a civil war. The opposing sides in civil wars are notoriously touchy about foreign meddling. 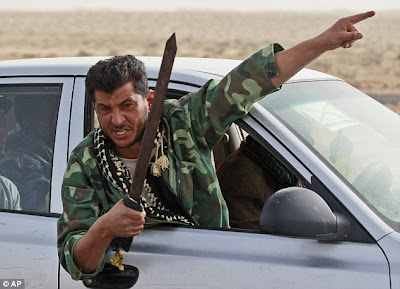 We would have gone crackers if the British had openly intervened in ours, as was the Confederate intent (see "Trent Affair, The") or even attempted to "mediate" between the Federal government and the rebels. Why does Gingrich believe that the Libyans, rebel or government, would behave any differently?

This gormless wretch Gingrich is only one of the several right-flank characters who seem to be all excited about killin' them - no, wait, getting OTHER Americans to kill - some Libyans, and you know who these people are; the usual suspects - Hitchens, Krauthammer, and no, I won't link to those dopes. And the biggest single commonality between them is that they none of them suggest the simple expedient of asking the friggin' Libyans if they want help.

I'm all in favor of slotting some dictators. Ask my pals; I practically had to be sedated when the Ceauşescus got their 7.39mm pink slip. Gadaffi would look great dangling tastefully a la Benito, or in the dock alongside Charles Taylor.

But if I want to do that I'll have to wait until this knucklehead Gingrich siezes power; a Libyan dictator is a Libyan problem...until the Libyans ask for my help. So Gadaffi is still a Libyan problem, and if we expect and demand the rights of a soveriegn state we owe it to the rest of the world to behave like one. Even before we were a formally a nation we expected the French to go through channels and sign a treaty of alliance before taking a slap at the Brits on our soil; WTF, Newt? You're supposed to be all historical n' shit (at least you and your ghostwriters seem to pick American history to make up stories about); you don't remember this? Has Callista's botox done something to your brain? 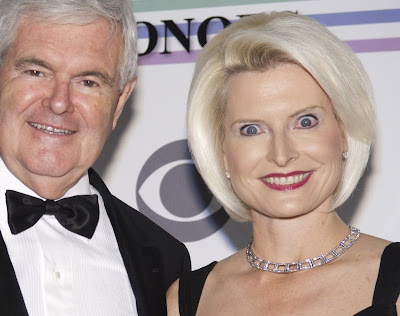 So, yes, dummy, we DO "need anyone's permission". We need the permission of the very fucking people you're so anxious to "help", if that's really what this is about and knowing you I doubt very much that it is. To even suggest that we just fly around over someone else's country uninvited reminds the rest of us why your skeevy ass only lasted two terms in the House; because you showed that you had no compunction about bullshitting, lying, shuckin' and jiving if it helped you or your political party.

So if you have something sensible to say about Libya I'd love to hear it.

Okay, fine. You now have my permission to put on your little hat and tool off to do something useful. Like shoving a sock in your pie-hole before you say more dumb stuff like this.
Posted by FDChief at 2:20 PM