Busy day today, but thought I'd throw out a couple of nutty clusters to chew on for the gang here.
SecState Pompeo delivered a real tubthumper of an address at the Nixon Library last Thursday about those tricksy Chinese. They're devious heathen devils, and apparently all the Western efforts to civilize them since "Nixon went to China" in the Seventies have gone for naught, so now it's time to muscle up and beef them around:

(Pompeo said that)..."the U.S. will organize the free world, while alienating and undermining the free world; he extols democracy, while aiding and abetting its destruction at home; and he praises the Chinese people, while generalizing about the ill intent of Chinese students who want to come to America.

Pompeo is also ultra-loyal to a president who cares not one whit for democracy, dissidents, freedom, or transparency overseas. Trump’s long track record on this is well documented, and it has defined his personal approach to China."

As we discussed here a while back, I'm all in favor of treating the PRC with cautious skepticism. But the problem here is that, having made it clear that if you're a Trumpkin, you're "America First" all the way, this administration has little diplomatic throw-weight to actually mobilize any sort of large-scale pushback against Chinese geopolitical ambitions. And then there's the whole "you are, too!" problem:

"The Chinese Communist Party wants a tributary international system where smaller countries are deferential to larger powers, instead of a rules-based international order where small countries enjoy equal rights. The CCP also sees no place for universal rights or global liberal norms, and wants to ignore the principles of open markets to pursue a predatory mercantilist economic policy.

All this will undoubtedly rachet up tensions in the East Asian littoral. What that means in practice? I'm not sure; right now the U.S. is too busy being devoured by the Plague to make anything as distant as the South China Sea fairly low on the priority list...

Meanwhile, half a world away the same U.S. administration has directed the USDOD to move about 12,000 military bodies out of the Federal Republic of Germany.

This does not, in case you're keeping score, count as a "Donald the Dove" peace proposal. These people aren't going to become VISTA volunteers. Many are going to other parts of Europe, including Poland(?), Belgium, and Italy. But some of this may tie into the aggressive rhetoric against the PRC:

“Several thousand troops currently assigned to Germany may be reassigned to other countries in Europe,” Trump’s national security adviser, Robert O’Brien, said in an op-ed published Tuesday in The Wall Street Journal. “Thousands may expect to redeploy to the Indo-Pacific, where the U.S. maintains a military presence in Guam, Hawaii, Alaska and Japan, as well as deployments in locations like Australia.”

It's difficult not to be cynical about seeing this as a Trumpian revenge against the German government and his bete noir, PM Merkel, for being insufficiently fawning. 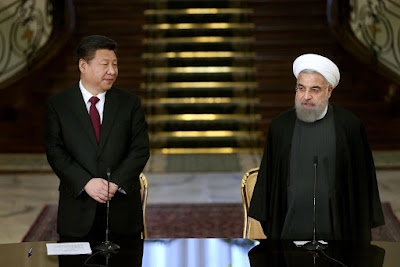 So much for "maximum pressure":

"Iran and China have quietly drafted a sweeping economic and security partnership that would clear the way for billions of dollars of Chinese investments in energy and other sectors, undercutting the Trump administration’s efforts to isolate the Iranian government because of its nuclear and military ambitions.

The partnership, detailed in an 18-page proposed agreement obtained by The New York Times, would vastly expand Chinese presence in banking, telecommunications, ports, railways and dozens of other projects. In exchange, China would receive a regular — and, according to an Iranian official and an oil trader, heavily discounted — supply of Iranian oil over the next 25 years.

The document also describes deepening military cooperation, potentially giving China a foothold in a region that has been a strategic preoccupation of the United States for decades. It calls for joint training and exercises, joint research and weapons development and intelligence sharing — all to fight “the lopsided battle with terrorism, drug and human trafficking and cross-border crimes.”

This is an obvious move for Iran, given that it is unavoidably clear that any Republican administration - and 2016 makes clear that the US electorate cannot be counted on not to elect a Republican government, no matter how ridiculous - will treat Iran to whatever they can manage of the Ledeen Doctrine.

This is also obviously a very deep tarpit for Iran. Other "Belt and Road" nations have found that the PRC gives nothing that it cannot take, and have found themselves in hock up to their national ears.

Still...a worthwhile reminder that when your only tool is a hammer, and the tool using that tool is an utter tool, you end up with a "foreign policy" stupider than a bagful of hammers.

Oh, well. We're too busy catching the Plague to worry about any of this stuff anymore.
Posted by FDChief at 7:00 PM 13 comments: