Speculation is rife in the chilly precincts of Washington D.C. about the prospect of showing Charlie-Sheen-level-nutzoid dictator Muhammar Gadaffi how no-fly-y a U.S.(U.K./NATO/EU???) no-fly zone might be. 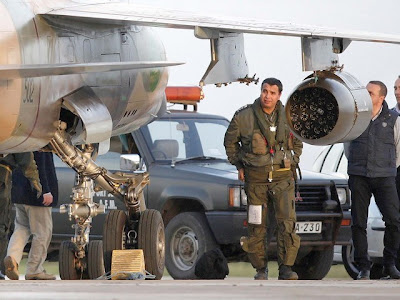 I happened to catch "Good Morning America" the other day and, just before changing channels to prevent gouging out my own eyeballs with a grapefruit spoon to stop the horror that is American network "news" I caught the male talking head "interviewing" U.S. ambassador to the UN Sue Rice and I thought the man was going to pop an actual testicle with the vehemence he used to squeal "But are you ready NOW to enforce a no-fly ZONE!"

Rice's response was, sadly, the worst sort of diplospeak and made her sound both confused and deceptive, an Ann Coulter parody of a timid liberal. She kept replying that the Administration was "...examining the options..." and "...had the situation on the front burner..." and asking "Can do that squeally thing again for me, bitch?"

OK, she didn't actually SAY the last one. But I'll bet she wanted to.

What's frustrating, to me, anyway, is the way this entire business is like living 2003 over again.

Again we're being bombed with rhetoric that seems disconnected from reality. Again we're being presented with a binary solution; the neocon/liberal interventionists are shrieking "go", almost everyone else is sitting back mumbling "ummm..."

But it seems to me that this is as perfect an illustration of the sort of thing that jim likes to hammer on; a vast confusion of what U.S. military power CAN do with what it needs to or SHOULD do.

David Axe points out the obvious; we bitchslapped the Libyans in the Eighties and their technical and tactical capabilities are, if anything, worse now. Could we ground the Libyan aircraft? 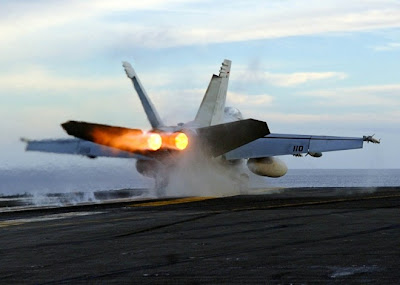 But's that not the important question. That question would be; what then?

Because, in effect, by sending warplaces ovr Libyan airspace we would be buying a piece of the anti-Gadaffi...whatever the hell is going on on the ground there. Which nobody, including the U.S. intelligence agencies, to judge by the variety of witless prosody emerging from U.S. government figures, has anything but the vaguest idea. So we'd become associated with whatever ends up in Benghazi after the star of Two-and-a-half-Whackos gets his pink slip.

And we have no flippin' idea what or who that will be. Sending U.S. aircraft over Libya would be nice for the Libyans, but it would be the geopolitical equivalent of John Travolta's ration plan from "Look Who's Talking": "Could be lunch meat, could be peaches. Who knows? Just cause it's garbage don't mean it don't taste good."

Sadly for the Libyans, the overriding mission of U.S. military aircraft is to defend the U.S., its interests, and its citizens.

(Interestingly, Spenser Ackerman thinks that someone in the Pentagon (either the SecDef or the CJCS) doesn't like the idea, either.)

Are we ready to deal with what would come after Gadaffi? And are we ready to up the ante if the no-fly zone doesn't "work? Bob Farley explains:

"As such, advocates of a no fly zone have to answer two difficult questions. First, to what extent do we really want to be responsible for installing the next regime in Tripoli? This is what we’d be doing, because a no fly zone is a military intervention intended to help one party win. Second, what if Gaddafi wins in spite of the enforcement of a no fly zone? There was a point at which Saddam Hussein seemed utterly dead in 1991, with a no fly zone appearing to be the coup de grace. Committing the United States to regime change in the form of enforcing a no fly zone made 2003 radically more likely, if not inevitable.

Advocates of a no fly zone, even those I respect, haven’t answered these questions to my satisfaction."

Hey, I loves me some blowing shit up - I was a cannon-cocker, after all. And blowing Libyans up? No sweat-di-dah.

But, frankly, without knowing what is to come after the Insane Clown Posse, or how far we would be willing to go to stop the clown act, why would I want, or the U.S. want, or ANY sane Western individual want to intervene militarily in another Islamic country? 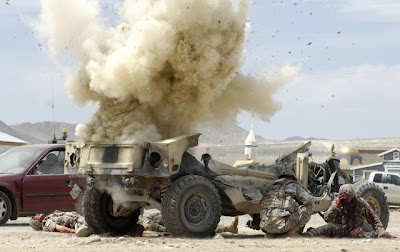 Because the first couple of tries worked so friggin well?
Posted by FDChief at 3:56 PM