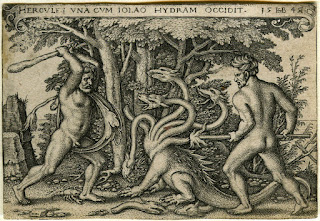 And why not recognize the contributions of Finance Clerks?

How sad that drone operators cannot receive the Distinguished Flying Cross or Air Medal, as both require participation in areal flight, nor the Bronze Star, which became so abused by the USAF that in 2001 Congress had to legislate physical presence in the combat zone as a requirement.  Seems that during the Kosovo operation, the USAF awarded the BSM to some 246 individuals. All but 60 were awarded to officers, and only 16 of those awarded were actually in the combat zone. At least five were awarded to officers that never left Whiteman AFB in Missouri.

So now the idea of a special "combat award" for drone operators is again on the table, as well as for "cyberwafare operators".  I guess the MSM and AF Commendation Medal are not considered enough for a job well done.

In no way am I suggesting that exceptional performance by a drone operator go unrecognized.  What makes me cringe is that the military and much of the population are so seduced by the sexy technology operated by these "remote warriors", that there is a movement to create a new award for them.  There is no question that drone operators provide a valuable skillset to the battlefield.  But there is a huge difference between the personal risks involved in direct combat operations and remote combat operations.

Way back in 1966, as a Warrant Officer Candidate, we had CW-4 O'Brian as our senior instructor in "Warrant Officer Development".  Trust me, back then, CW-4s were almost as rare as 4 Star Generals, and a hell of a lot more revered.  He served in WWII in the Pacific with the Navy, and became a Master Hard Hat Diver after the War.  Got bored and enlisted in the USMC when Korea broke out, receiving the Navy Cross there.  Then he found out that the Army was training enlisted troopies to be Aviation WOs and signed up for that.  Served in RVN, receiving a couple of DFCs.  Also wore at least one Purple Heart from each of those wars.  In short, he wasn't an Office Pogue by any stretch.  One of the classes he taught was "Awards and Decorations", as the typical unit A&D Officer in Aviation units was a junior WO.  CW-4 O'Brian was quick to point out that for every "heroic Aviator" in the typical Aviation unit, there were 6 to 8 support troops feeding us, equipping us, getting us paid, keeping our aircraft flyable and so forth.  They may not be called upon to be "brave" or face the enemy to do an exceptional job, but if they didn't at least do a satisfactory job, we Aviators would be in a bind.  Therefore, he admonished us, never overlook exceptional performance by the guys back at base camp.  When they excel, pin a medal on them.

Are today's "Warriors" and "Remote Warriors" oblivious to the fact that they are part of a team?  What if the Finance Clerks failed to perform?  What would be the impact on deployed troopies to learn that Mama and Kiddos back home aren't receiving the paycheck?  What about the electronics and signal folks maintaining and operating the computers, comms and satellites that make the drones possible.  Or the supply folks that keep the parts pipeline going so the drones and their support gear is up and running?

There are already awards for meritorious service not involving personal presence on the battlefield.  Would it be so terrible to award a drone operator an MSM just as one would the aforementioned Finance, Maint or Supply Troopie?  The existing regs of all the services provide for this.

Or, if it means so much, create an RSCO (Remote Support of Combat Operations) device, much like the "V" for valor, to afix to existing awards for achievement or meritorious service that directly impacts on the battlefield.  I'm sure some talented graphic artist could come up with something "cool".  Just because remote operations reduce the opportunity for valor, should we create faux valor awards as a sop to those called upon to contribute to the team  from the rear?

Or, is this simply an attempt to add more glory to the drone pilots' image to fight the USAF's serious problems retaining them?

Prof Andrew Bacevich is so right.  War has become a spectator sport, and now DOD wants to make pseudo combatants of some of the spectators.
Posted by Aviator47 at 7:14 AM 48 comments:

Are Iraqis on a rollback against the caliphate? Not just Ramadi, but before that Gwer, Makhmur, Jalabja, al-Mansouryah, Tikrit, Baiji, Bashiqa, and Sinjar. Many by the Pesh, some by Hashd al-Shaabi, some by the Army.

I wish their country well. May the new year of 2016 bring them peace and prosperity. But I doubt very much that it will. Their constitution is a blueprint for a theocracy that also laid the groundwork for civil war aided by external agents.

Here is the Preamble to their Constitution from 2005:

"We the sons of Mesopotamia, land of the prophets, resting place of the holy imams, the leaders of civilization and the creators of the alphabet, the cradle of arithmetic; on our land, the first law put in place by mankind was written; in our nation, the most noble era of justice in the politics of nations was laid down; on our soil, the followers of the prophet and the saints prayed, the philosophers and the scientists theorized and poets created."

I get it about their pride in Iraqi history. They deserve it. Their land was a birthplace of civilization and a cradle of empires and monotheism when my ancestors tattooed their bodies blue, worshiped trees, and engaged in human sacrifice.

But with that phrase in the preamble: ”… resting place of the holy imams,…” they are advocating a single religious doctrine within what used to be a multicultural state (kind of like what the daesh caliphate is doing). The resting places they are talking about are of course six of what the Shia believe to be twelve divinely ordained and infallible leaders known as The Twelve Imams. Those six are resting in mosques in Karbala, Najaf, Samarra and Baghdad. Fundamentalist Sunnis consider those shrines an abomination. 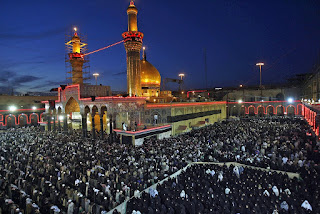 All of those mosques have been bombed, mortared or otherwise attacked multiple times since 2003.  The holiest of these to the Shia is the Imam Husayn Shrine in Karbala:

It was destroyed by Sunni Caliphs Harun al-Rashid and al-Mutawakkil in 787 and 850.

It was destroyed again in 886.

Wahabbis attacked it in 1801 and looted the sepulchre.

Sadaam’s Republican Guard damaged it as a reprisal for the Shia uprising of March 1991.

After Sadaam fled, at least 6 explosions occurred near it during the Ashura commemorations in March 2004, killing 178 people and wounding 500.

A bomb detonated near the gate of the shrine in December 2004, killing at least 7 people and injuring 31 others.

Suicide bombers at the shrine killed at least 60 people and injured more than 100 in January 2006.

In March 2008 a female suicide bomber detonated herself in the market near the shrine, killing at least 42 people and injured 58 others.

In September 2008 a bomb was detonated 800 m from the shrine, killing one woman and injuring 12 others.

In February 2009 a bomb blast killed 8 people and wounded more than 50 others during the commemoration of Arba‘een.

In February 2010, again at Arba‘een, three bomb attacks were aimed at the shrine:
- on 1 February a female suicide bomber detonated herself, killing 54 and injuring more than 100;
- two days later on the 3rd a bomb blast killed at least 23 people and injured more than 147;
- two days after that on the 5th a double bomb-blast or a combination of a bomb-blast and mortar attack killed at least 42 and left 150 injured.

That is 15 attacks on one of the holiest sites in Shia Islam. Ten of them occurred in a seven year time window from 2004 thru 2010. And they will surely be attacked again. Maybe Iraq should be a Shia theocracy, or maybe they already are? But how could that work considering that the Shia only represent about 61 or 62% of the Iraqi population? They appear to be mimicking Sadaam, doing to the Sunnis what Sadaam did to them. Maliki and the DAWA Party (which was bought and paid for by Iran) brought that on. 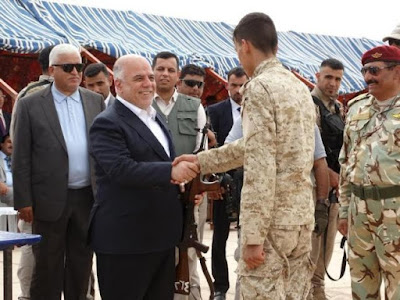 Abadi is supposedly better. Here Abadi is seen greeting Sunni militiamen near Ramadi. But Abadi is also from the DAWA Party. So is the smile genuine or is he smiling while contemplating 'revenge-served-cold' after the Americans leave for good? And Maliki, although no longer Prime Minister is still in Government as Vice President.

What are their options to keep the peace: forced conversion? forced expulsion? ethnic cleansing (or its religious equivalent)? partition?

And because of oil in the Sunni and Kurdish areas does anyone see them ever agreeing to partition? Wouldn't their big brother to the east back them up on rebuffing partition, especially for the Kurds? After Daesh is defeated will the Iraqi government go to war with the Kurds over Kurdish occupation of Kirkuk and its oil? Already there has been shooting between the Shia militias and Peshmerga in Kirkuk.
Posted by mike at 7:40 AM 24 comments: