Trump gives Netanyahu guarantees on the freedom of Israeli operations in Syria.  This comes after Russia starts shipping S300 systems to Syria because of the IL-20M shootdown.   What was specifically guaranteed?  It was not said.

I am assuming that the Trump did NOT pledge direct American support to future IAF airstrikes against the Hez and/or Iranian weapon shipments to the Hez.  But <i>'assuming'</i> is well known to make asses out of many in the past, myself included.   And the <i>'butthead-in-chief'</i> has been known to make do moronic stuff.   So I for one am hoping that his guarantees to Netanyahu are as meaningless as were his many past promises to  voters, veterans, business partners, subcontractors, etc, etc ad infinitum.
Posted by mike at 10:02 AM 31 comments:

How did a country that used to have one of the better air defense systems in the Mideast turn into such a clown-show?  How do they manage to shoot down a Russian aircraft, their ally, with Russian SAMs? 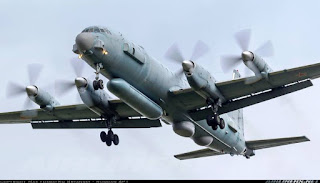 The reason has to be the civil war.  This forced a major change in the organization of the Syrian Armed Forces and the share of resources.   The primary threat to Syria became jihadi militants and irregulars.  Ergo, the Syrian Air Defense Force ended up at the scheisse end of the priority queue.  Plus the rebels captured several airfields and air defense installations and destroyed or damaged a number of AD systems and killed, captured or converted their crews.  Many of those bases have now been recaptured and are starting to be re-manned with new or upgraded systems received form Uncle Vlad.  But they are still a low priority for a country that is only saved from bankruptcy by the charity of Tehran and Moscow.   Then there is the Israeli Air Force.  They have years of experience going up against Syrian SAMs and seem to be able to take them out easily, which make the SAM crews extremely nervous.  There must be a lot of pressure on them to live up to the propaganda.  And how well trained are they?  There is also a rumor that some of the crews are partially manned by Hezbollah, supposedly to train them for a possible future transfer of systems to Lebanon.

The Russians, after first blaming the French Navy, have finally admitted it was their own allies that 'inadvertently' shot down their ELINT & RADINT capable IL-20M with 15 souls aboard.  But they maintain it was Israel's fault for using the IL-20 to mask their approach.  Maybe so, or not?  We'll see if the radar tracks and timing are ever published.  The S-200VE, 'Vega-E, SAM system that brought down the IL-20 was supposed to have been upgraded with IFF capabilities.  They obviously did not work.  Perhaps due to an ill-trained crew, or perhaps due to Israeli jamming, or perhaps the aircraft IFF transponder was broken or turned off or deliberately using a ghost signal.  I am more inclined to think the SAM crews were in a panic and fired off some missiles on a 'ballistic trajectory' and 'without guidance' like they did back in April for the US/UK/FR missile strike.   The warhead on the S-200 is 217 kilos (478 pounds), approximately half the weight in HE and the other half in 37,000 fragmentation pellets.  It is triggered by either radar proximity fuse or command signal.   I have no clue as to the blast radius.

I am neither a fan of Putin nor Netanyahu.  But I do admire the Russian and the Israeli people, with the exception of the vicious right wing in both of those countries, and in my own country.  Let's hope those yahoos don't get the US into a shooting war with Russia, if Putin or Shoigu decides to retaliate against the IAF with their S-400s they have in Syria and it escalates.  Maybe 'moderate dog' Mattis can keep Trumpkin out of it, but the Congress would want in on it, both parties.
Posted by mike at 12:04 AM 65 comments:

We have been in Afghanistan now for 17 years.  The reason we went in was 9/11, but Seal Team 8 killed the man responsible for that six years ago.  Why are we still there?   This war is older than some of my grandchildren and all of my great-grandchildren.  When do we get out of there?

Alexander the Great spent less than a year there.  He arrived in May 327 BC and left in March 326 BC after renaming a city after himself (Alexandria of Arachosia).  The name did not stick.  Soon after he left the Pashtuns gave it back its old name, Kandahar.   But he was smart enough to get out of Dodge City in just ten months.   Getting out was something the Brits and the Soviets learned the hard way.   But that is something we haven't learned yet.  We should rename Kandahar, maybe to FlatBush, or Obamaville, or Trumptown and then abandon the place.
Posted by mike at 9:09 PM 16 comments: