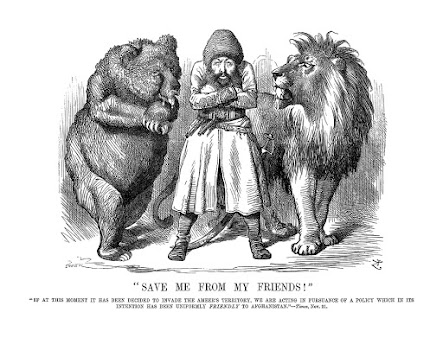 We had a fairly long discussion here about the "lessons learned" - or, rather, whether lessons that seem obvious in hindsight were, in fact, too difficult for the military boffins of 1914 to discern - in the first catastrophic war of the 20th Century.

Now the NY Times discusses a pointless (and "catastrophic" in the sense of "blood and treasure wasted for no geopolitically valid objective") war of the 21st Century, the mess that the United States has made in the Grave of Empires:

"It’s not as if Mr. Biden is being pressured to stay in Afghanistan with a cogent argument; most analysts freely admit that the United States has no plausible path to victory, that the military isn’t trained to midwife democracy and that the Afghan government is grievously corrupt.

Rather, the national security community cannot bear to display its failure. That’s why many who advocate continuing the war are left grasping for illogical or far-fetched justifications. In a meeting of National Security Council principals, the chairman of the Joint Chiefs of Staff, Gen. Mark Milley, reportedly made an emotional plea to stay in Afghanistan, after “all the blood and treasure spent” there."

This is the classic "sunk costs" theory that has been used to justify military shenanigans since the Peloponnesian War, and certainly we've seen modern Great Powers do this repeatedly (I'd argue that the real problem isn't that the U.S. foreign policy establishment was "traumatized" by the disaster in Vietnam but, rather, that the lessons IT taught were not learned, either...)

To me, the big question that the rolling clusterfuck that is the U.S.'s misadventures in the whole "land war in Asia" business is "is there a way for Great Powers - or, indeed, most polities - to make foreign policy decisions that are based on "national interests" that are, indeed, based on the interests of the bulk of the people in the polity"?

It's hard to see too many examples that prove that there is, so my question for the readership is "can you think of an example of a policy (or set of policies) or decision(s) that show that this sort of intelligent geopolitics IS possible?"

Is there (are there?) examples that, say, the "blobs" of various nation-states could look to for a way to see their way through to avoiding the very sort of complete clusterfuck on display when you look at the U.S. foreign policy camorra and it's work in Afghanistan since 2001?