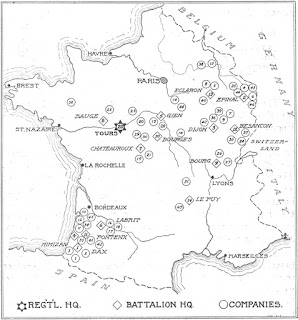 Back in October our barkeep P.F. Khans asked: "...Who is Responsible for the Hospital Bombing?" about the then-current speculation over the U.S. armed forces actions during a bombardment of a Doctors Without Borders (Medicins san Frontiers, or MSF) hospital in Kunduz, Afghanistan. 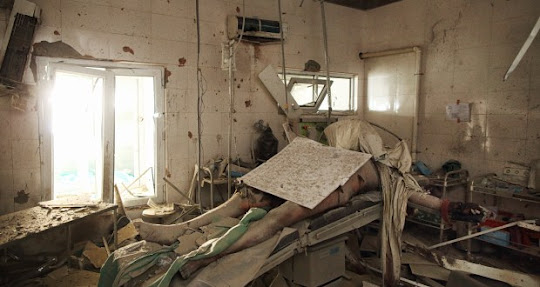 One of the persistent questions was how could the U.S. and U.S.-advised Afghan forces have targeted what was a very distinctive hospital compound, one that should have been recognizable even from the air as a no-fire zone.

The U.S. higher responsible for the area of operations, Central Command (CENTCOM) released its report in April, and it contains some information on how this could have happened. From the blog Lawfare:

"Two mishaps that were clearly not criminal in nature occurred early on in the night mission, and those mistakes paved the way for the tragedy to follow in Kunduz. First, the attacking aircraft—an AC-130U with extensive firepower on board—took off early because of a report of U.S. troops being attacked. Due to the haste of the aircraft’s departure, there was no time to upload the “No-Strike List” (NSL) to the aircraft’s computers.

This question came up repeatedly in the original discussion. In his post, PF said:

"There's a Fire Direction Chief (sorry FDChief) that's got an AFATDS computer which should have had all hospitals/other sensitive areas restricted, so that you are warned if you are shooting there. Someone has to manually enter that data, was that data input into the system? Was the hospital in this AFATDS computer?

I don't see a reason that it wouldn't/shouldn't have been. I get that an AC-130 gunship may have to cover a lot of territory, but it's the 14th year of the war. Someone has managed this data. Someone spent a boring deployment porting this data to all the systems. This should have been done by now, that hospital didn't spring up when the Taliban attacked.

In the comments section I noted that the USAF didn't use the U.S. Army FA fire direction system, but that while

"...(a)ir fires are neither controlled nor coordinated thru the FA direct support elements. That includes the firing battery and battalion FDCs as well as both the FO elements attached to the maneuver platoons and the FSEs at the maneuver company and battalion HQs. The FSEs may liase w USAF control teams to clear potential CAS target areas of friendly forces but have no role in CAS missions beyond that. So the responsibility for CAS mission direction would be on the USAF FACP (forward air control party - at least that was the term when I was still in ten years ago...). The FAC should have, as has been noted above, been advised of NFAs ("no fire areas") as well as RFZs ("restricted fire zones") established by the maneuver commander."

Well, it turns out that the control party - which consisted of U.S. Army Special Forces troops - had more problems than just missing overlays. The Lawfare article goes on to report:

"Second, well before the attack on the MSF facility began, the U.S. aircraft’s satellite radio—its data link—failed. While the aircraft still had radio contact with ground forces, it could not send or receive emails or upload data, such as the NSL. Special Operations forces on the ground wanted to target a prison overrun by the Taliban, formerly run by the Afghan government’s National Directorate of Security (NDS). However, because of the lack of a data upload capacity and imprecise descriptions at both ends of communications, the aircraft crew mistook the MSF facility for the former NDS prison."

To make matters worse, the commander of the maneuver forces was working with a combat controller - or, more specifically, a "joint terminal attack controller" or JTAC (since a combat controller is a USAF-specific occupational specialty and the JTAC may be from any service branch...). The report says that the aggressive maneuver commander and the cherry JTAC turned out to be a combination lethal for the patients and staff of the MSF hospital:

"...ground forces informed the crew that the intended target had an “arch-shaped gate.” While this description matched many buildings in the area, the crew took it as a match for the MSF facility. The ground force commander (GFC) did not seek clarification, and had no independent visual ability to confirm the crew’s judgment. In other words, the GFC and the aircraft crew were actually labeling entirely different structures as being one and the same. (T)he (air)crew repeatedly asked the GFC to confirm that the intended target was a “large t-shape building.” The GFC (or his inexperienced subordinate, the...JTAC...confirmed this description, which matched many buildings in the vicinity. Unfortunately, the crew and the GFC were still unknowingly talking about two different buildings: the crew “had eyes” on the MSF facility, which was marked with MSF emblems but not the more familiar red cross or red crescent symbols used globally to label medical sites, while the GFC believed that the crew was describing the intended target: the NDS prison held by the Taliban. The JTAC did not help matters with instructions such as “soften the target,” which did not correspond to the situation the crew was viewing in real time."

And the maneuver commander seems to have been a real wild man:

"This communications failure was compounded by the inappropriately aggressive posture of the GFC, whom the military report described as having “willfully violated” the ROE. The US ROE restricted the use of air power, except in response to a hostile act by the Taliban directed at U.S. forces. However, the GFC ordered the attack on the MSF facility although the GFC “could not have reasonably believed” that the attack was justified by an ongoing hostile act. While the GFC asserted to military investigators that he saw what he believed to be an attack on a friendly military convoy, the Centcom report viewed that assertion as inconsistent with other sources, including aircraft video, radio transcripts, and tracking data. Moreover, the military’s report indicated that the GFC, because of distance from the convoy, could not have had the line of sight that he claimed. In sum, even an attack on the “right” target—the NDS facility—would not have been a response to hostile fires, as the ROE required. Because of the GFC’s aggressive posture and the mutual misidentification of the MSF facility as the “right” NDS target, the attack commenced."


Once the bombardment started the commo problems interfered again;

"Shortly after the attack started, MSF representatives contacted U.S. commands, imploring them to stop the fires. However, the communications failure and the ground-air misunderstandings severely impeded a timely U.S. response. About 12 minutes into the attack, personnel at the U.S. Special Operations Task Force inquired about the coordinates of the target being engaged. Two minutes later, U.S. personnel contacted the crew and sought to confirm that the attack had not harmed the MSF facility. The crew stated that the MSF facility hadn’t been touched, reporting that the only structures affected were the “T-shaped building” or adjacent structures, which the GFC had earlier mistakenly identified as the NDS prison, although in reality the crew was still describing the MSF hospital. It took several more minutes to ascertain that the building being attacked was in fact the MSF facility. Once that awful realization took hold, the attack ceased."

The military’s report details the errors that dogged each step in this appalling episode. Not unlike the critical moments of Ian McEwan’s novel Atonement, missteps and misunderstandings at several junctures paved the way for an unspeakable tragedy.

In other words; war.

The usual suspects are saying the usual things. "Conservatives" are draping themselves in yellow ribbons, "liberals" in loathing of the licentious soldiery and distrust of the "official story". Regardless of opinion, the business is done, now, except for in the grave, or the twisted bodies of the injured, or the anger of the survivors and families.

My original point in the comments stands; that regardless of whether this was a deliberate attack or a mistake, the failure of the U.S. command authority in Afghanistan to quickly and publicly discipline the individuals involved sent a clear message that Afghan lives didn't matter, not as much as American servicepeople's lives, or even of their careers.

When suppressing rebellions there is a tried and true method. Unfortunately, it is also unspeakably savage, the Roman Way - make a silence and call it peace.

The West wants and hopes that hearts and minds can be won, that the "Afridis where they run" can be wooed rather than butchered, that there is a kinder, gentler way to suppress revolts. Unfortunately, to do that the suppressor's troops have to be held to a standard that admits no such lethal errors as these, and that every drop of blood spilled with the sword is payed for with a drop of blood drawn by the lash.

We choose not to lash ourselves, and therefore should not be surprised that our means and methods are not embraced by those we slash.