It appears that the Allies are fighting for Tobruk again. 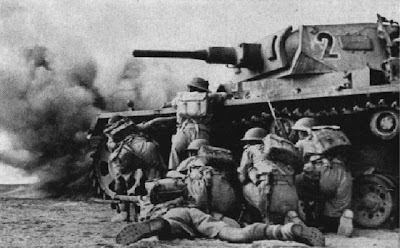 The interventionists - neocons and liberal "humanitarians" - have won the internal debate that has United States airpower now fighting the Gaddafi regime on the ground in Libya.

What first thing I want to emphasize is the degree that the U.S. really does not, and will not, have a dog in this fight. 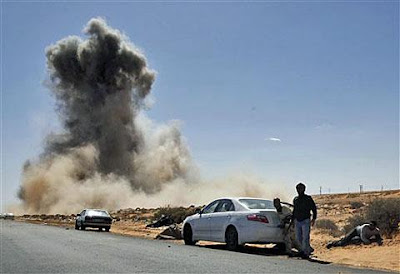 Libya is really strategically insignificant to the U.S. No matter who runs it, it controls no transportation choke point needed for U.S. trade or movement. Its petroleum, what there is of it, goes almost entirely to Europe. It has not presented a military threat to the United States since O'Bannion's day. It is a geopolitical nullity.

Yes, Gaddafi is a madman, but we have backed madmen and dictators before when they served our purposes. The "rebels" in eastern Libya are, many of them, strongmen who not long ago were doing the government's dirty work. There is no evidence that the rebel cabal, whatever and whoever they represent, are any long-term improvement on the Libyan government that is headed by Gaddafi.

And the second is that the real problem with sending American military power into Libya, just as there was in Afghanistan and Iraq (and Kosovo, Somali, Panama, and most of the other late 20th Century U.S. military expeditions) is the problem illustrated by a look back at our own First Civil War.

In 1781 the nascent U.S. field forces were led by Washington, a man who regardless of his other qualities was supremely aware of the realities of power. 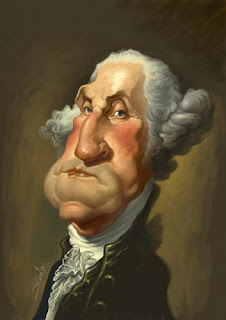 He knew perfectly well that France was providing a massive infusion of land and sea power, and cash, without which the rebellion would have probably been driven to the brink of defeat. But he also knew that allowing the French to take over field operations was opening the door to a destructively powerful French influence over Continental politics. He never allowed Rochambeau, or de Grasse, to forget that he was the coalition commander. He insisted on equality (at least on land; he was smart enough not to pretend that the United States had any seapower at all) in tactical operations between the Continental and French troops. 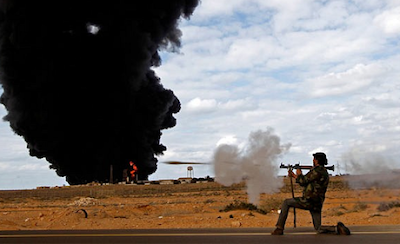 I have no idea what the hell the Libyan rebels are fielding on the ground. They appear to have been unable to produce any significant success against the ragged mess of thug-"soldiers" and mercenaries the Gaddafi regime has fielded up to this point. They do not appear to really have any sort of central command and control at all, instead consisting of a tattered congeries of warlord-militias fighting every which way. The air attacks do not seem to have been coordinated with whoever is "commanding" the rebel forces on the ground, instead concentrating on Gaddafi troops in bivouac and on SEAD. We will see whether this changes in the coming days. But given the recent trends of "coalition" warfare in which U.S. forces have taken a part I would be shocked as hell to see a Libyan commander in the role of Washington, directing the U.S. and European warplanes where and when to attack.

The outcome of the Franco-American alliance of 1781 was successful for the U.S. because the U.S. had a powerful influence on, and in parts and at times actually controlled, the military actions of their allies. The modern Libyans do not appear to have any such control, or even influence, and they do not seem likely to. 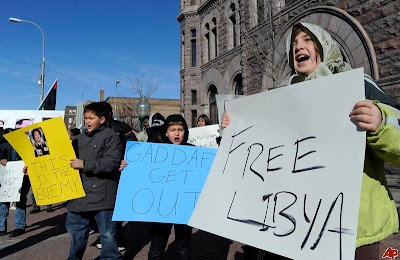 When you invite someone to help you defend your home and determine what he does and how much force he employs, you are still the master of your house.

If a stranger breaks in your door and starts attacking your enemies you aren't the master of anything. You are at the mercy, literally, of that stranger. If he chooses to outstay his welcome, if he chooses to push you around, you are in no position to demand anything. You are not Washington, leading your country's defense; you are just another sad-sack Italian count whose condottiere have the power to unseat you any time they choose. 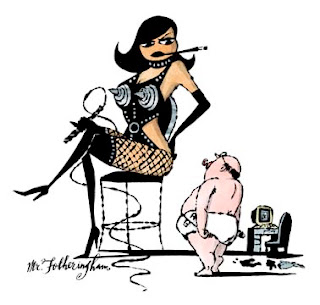 They hold the whip hand. You are their bitch, regardless of what you think, or how much you pretend otherwise.

Because you can make your throne on others' bayonets.

But in the long run you will probably not like the way your ass feels about it.

And as for the U.S., I see no point in our becoming the leather queen of the Gulf of Sidra. As with most of these sorts of unequal relationships, the pleasure is transient, the position ridiculous, and the expense damnable.

The commander of the coalition of 1781 had the word for us; nations that expend treasure for things not in their interests risk gaining nothing but trouble for their expense. Why we seem to persist in believing otherwise I have no idea. But it seems to me to say something very scathing about the state of political discourse and geopolitical thinking in my country.

Update 3/23: The single biggest question I have about this adventure is the degree to which it is the result of actual strategic and geopolitical thought, rather than just a sort of huggy-wuffy desire to stop Gaddafi making Libyan babies sad.

Let me first emphasize that I like babies, and I don't like it when they're sad. But the point behind military force isn't keeping people from making a specific baby or ten sad; it's to cut them off at the neck so they can't make babies sad over the long term.

The final Sri Lankan offensive that crushed the LTTE killed lots of babies. And women, kids, innocent civilians, monkeys, roebucks, and everything else. Sherman's actions in Georgia killed, directly or indirectly, hundreds or thousands of innocents. But those operations successfully concluded civil wars so that in the long run less babies were sad.

The first rule in any war is, or should be, what my old medical sergeants drummed into me with fist and boot at Ft. Sam back in the day; primum non nocere. First, Do No Harm. The bloodletting should end up with a political situation that is MORE stable, less conducive to continued bloodletting, than before the first grenadier stepped off.

Here's one analysis that concludes that this operation, to include what seems like comedic levels of political hot-potato-tossing about who gets to run this thing, are really part of a Cunning Plan, and that the eventualities such as a Gaddafi-supporter insurgency are being thought out. If so, this is likely to produce a Gaddafi-free Libya where the babies can grow up happy and free. Or at least that's the theory.

Mmmm...I'm not so sure. The Libyan rebels seem to be a shambolic mess. The reasons that Kosovo and the Kurdish NFZ worked out as well as they did was because both the KLA and the Kurdish peshmerga were tough, capable bastards well versed in cutting a throat. We don't seem to have anyone like that on the ground in Libya, and I think that will become increasingly problematic in the future. I think that a hell of a lot of this "planning" has been premised not on what is likely to happen but what we hope will happen if every bomb falls on target AND the locals suddenly develop into the 2nd SS Panzer. And my reservation is that I feel very sure that neither of those will happen.

But...alia jacta est. At this point all I can hope for is that hope IS a strategy, that things work out well, and that the babies are happy in the end.
Posted by FDChief at 12:06 PM