"After learning they were laid off, about a dozen workers attacked a vehicle carrying Radhey Shyam Roy as he was leaving the factory in eastern Orissa state Thursday, dousing the Jeep with gasoline and setting it on fire, said Police Superintendent Ajay Kumar Sarangi." 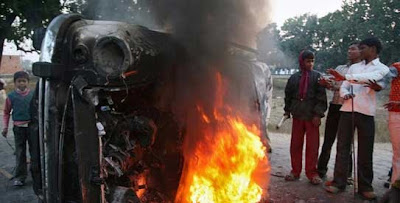 "Two other people in the vehicle were allowed to flee but Roy, 59, was trapped inside and later died of severe burns, he said"

What was it we were saying about the economic prospects of working-class Americans and the political troubles that might result?

Bet when the senior staff hosts a "roast" for the VP for Management at U.S. Steel this is NOT what they have in mind.
Posted by FDChief at 4:10 PM