Hiding Cards in the Great Game

So apparently the Fraudulency Administration is going to continue to try to hustle the East.

(And I should add to any readers out there who said, or believed, this: No. Donald Trump didn't ever mean what he said when he talked about "disengagement" (or whatever fourth-grade word he used for "getting the fuck out of Southwest Asia") on the stump. He...well, to call it "lied" would be to presume that he even bothered to put the effort into giving a fuck about whatever word salad came out of his piehole...didn't have the slightest idea or care the least bit about the pointless military farkling about west of the Khyber Pass any more than he really meant that you were going to have the best medical coverage, waaaay better than Obamacare. Donald Trump isn't some sort of pacifist, or even an isolationist. He's a conman and, like any good conman, he said what he needed to to get you poor, dumb bastards to buy his snake oil.)

Now this is all the same-shit-different-Groundhog-Day that the U.S. has been doing in the Grave of Empires ever since Dubya's day. IT didn't work when we had damn near 100,000 guys in theatre and it won't work now. I can talk forever about how it's going to be impossible without Pakistani buy-in and how the Pakis won't buy in because of the Kabul government's coziness with India, about how Trump's nonsensical rejection of "nation-building" leaves the problem of Afghan government corruption and malfeasance in place and, thus, ensures the worthlessness of any sort of military success.

But that's not what gets me about the latest round of this idiocy.

It's Orange Foolius' ridiculous obsession with not telling who he's going to direct the Pentagon to send as reinforcements.

(Oh, and another note: I'm hearing people talk about how "serious" and "presidential" the oaf sounded Monday night. Look. Regardless of how "presidential" he sounded his Afghan "plan" is a ridiculous mess of pottage that wouldn't produce a successful toddler's birthday party, let alone a solution to an intractable colonial war in one of the least-hospitable parts of the globe. Focusing on how The Idiot sounded lets the punditry elide what a mess he and his best, "the very best" military advisors have devised. As I noted; over 100,000 troopers complete with horse, foot, and artillery couldn't suppress the Pashtun. Now a couple of new brigade rotations is gonna work. And we're not "nation building" when every swinging richard who has taken a look at this has concluded that one of the single biggest problems is the regime in Kabul, which is loathed when its not ignored by every Afghan outside those leaching off it? So...no. He wasn't "serious" Monday night. He may have sounded "serious", but what he actually SAID was just the same Trump nonsense.)

A combat brigade, like love and a cough, is hard to hide. Trust me, the Talibs have people inside our log facilities in-theatre. When a new unit is due to arrive their advance party is on the ground making coordinations days, weeks, sometimes even months before the main body arrives. The muj will get intel on, at the very least, when and who is showing up long before they get there.

And the muj will also have people shadowing the units in the field AOs. They'll notice when the ADVON guys show up to coordinate the relief with the departing unit (or set up FOBs for a new AO). They may not know exactly which outfit is going to show up, or exactly where and when...but they'll have a pretty good idea that SOMEbody is coming.

But this all fits with Orange Foolius' ideas that war is like some sort of game where you "win" by hiding your cards or something, and, sadly, it also fits with our geopolitical infatuation with tactics as strategy. Every Great Power that has ever meddled with the Central Asian highlands has eventually figured out that you 1) choose your most ruthless local satrap, arm and equip him, and 2) declare victory and leave. Then, when your proxy falls to the inevitable coup or rebellion or whatever you shrug and move on. The whole damn place is pretty worthless.

"Killing terrorists" is just going to end up killing...more people. More Afghans. Meaning that we'll end us sowing Cadmus' teeth and making one or two new muj for everyone we kill. If you want to go Full Roman and make a wasteland? That's pretty much the only way that works. But, hopefully, Trump and his merry band of neoNazis aren't ready to tap their Inner Reinhard Heydrich.

So the only people that this idiot is fooling with his secrecy are the people he's supposed to be straight with; the U.S. public. The Talibs will know before any of us civilians where and who he's sending to slay Afridis where they run.

Which will work just as well as is has for the past 17 years.

I know I've said this before. But, apparently, it's worth repeating; no Great Power has ever solved Afghanistan.

The only way to "win" this Central Asian Game of Thrones is not to play.

But being convinced that you're fooling your enemies by hiding cards in plain sight?

So for some bizarre reason we're back to fiddling with these damn DPRK nukes again, largely, I suspect, because the Tweeter-in-Chief has got a whole lot of people clenched up to Pucker Factor 11 by promising "fire and fury" if His Porkulency Kim Jong Un cocks another nuclear snook at the Land of the Free and the Home of the B-52s (seeing as the current objet de furor seems to be principally the U.S. installations on Guam).

(And let me note in passing that...what the hell is it with U.S. politicians and chest-beating military rhetoric? Trump, in particular, seems pretty damn partial to bluster for a man who had a fistful of deferments from getting within sniffing distance of harm's way back in the day. Whenever I run across this stuff I'm forcefully reminded of yet another of the wonderful bits of writing from Robert Bolt's "A Man For All Seasons". In particular, where Thomas More, having been arrested for treason and under "examination" by the current Chancellor of England Thomas Cromwell, is reminded by the latter of the government's capacity for causing More physical pain.

"How should I threaten, then?" snarls Cromwell, angry at being chided by a man that he can have tortured or killed and who, therefore, should be fearful instead of caustic.

More looks Cromwell up and down (and, remember, More was Cromwell's predecessor as Chancellor) and observes dryly: "Like a Minister of State.")

Perhaps the MOST frustrating thing about this is that we know, His Porkulency knows, and Trump knows that there really are no good military options for dealing with the NORK nukes. Keep in mind I'm not saying there are no options - just that there aren't any really optimal military ones.

So the Tangerine Tweetmonger's bluster is really just that, unless he's actually stupid enough to consider the loss of life in our Korean ally outside of consideration. But whenever the custodian of one of the globe's biggest nuclear weapons stockpile is flapping his gums like a schoolyard bully that sort of bluster is hard to ignore, regardless of the uselessness of the blustering.

Or maybe it's just me. I came of age at a time when the "enemies" my country was supposed to confront were global powers armed, as we were, with ginormous armies and fleets and swarms of aircraft and glowing piles of nukes. 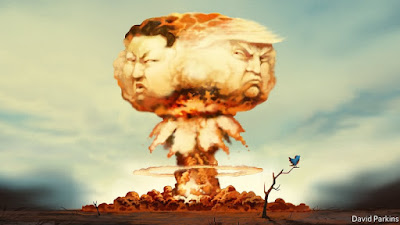 Perhaps we should all just relax and have a nice sandwich.
Posted by FDChief at 1:10 PM 36 comments:

End of the runway for the SPAD II?

David Axe at War is Boring has a summary of the current situation at the USAF higher with regard to close air support.

The tl:dr version is that:

As a history buff I can kind of understand why the USAF hates being in the CAS business. It had to fight hard to shake loose from Army control because the Army thought that the best use for aircraft was low over the troops. It's also goddamn dangerous, even moreso with improvements in AAA such as shoulder-fired SAMS as well as longer-range, higher-altitude counterair systems such as the Russian S-400.

That said...upgrades and improvements in the U.S. FA branch have been underwhelming in the past half-century. We're still using legacy systems from the early Cold War and, particularly, the fire support base in the light infantry units (including light mechanized outfits like the Army's Stryker brigades) is dependent on towed gun systems such as the M119A1 and the M777A2 that have some fairly significant issues.

So for the foreseeable future the U.S. Army is going to lean heavily on USAF CAS missions for heavy fire support. The problem appears to be that the USAF is still really unenthused about those missions.

As a former earthpig veterinarian I have a deep emotional fondness for the new SPAD, and so I can't be objective about the USAF's apparent eagerness to 86 it. But perhaps the real problem isn't so much to "Save the SPAD" but to try and avoid sending U.S. infantry to farkle about in places where the need for close air support is essential? Or to rethink the tactical/operational setup so as to provide more fire support in the form of FA fires rather than from the Wild Blue Yonder? OR, as both Sven and Ael mention in the comments, would an entirely new mix of armed drone platforms and improved FA systems be a better solution? Would the USAF be willing to accept an armed Army-controlled CAS drone as an exception to the Key West Agreement..? 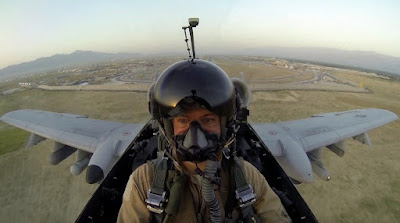