Happy Xmas (War is Over)

While not really changing my opinion that the current Administration is an overall total clownshow, I gotta give credit where credit is due: Trump left Zalmay Kalilzad in Qatar to hammer out a war-ending ceasefire agreement with the Taliban representatives, and he did, inking a pact at the end of this week that sets out a process to finally #endendlesswar. 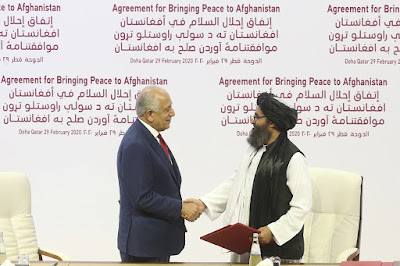 Now...there's a bunch of troublesome cans that this kicks down the road.

The Kabul government wasn't party to this critter.

That, in itself, might be a dealbreaker in a sense. Because as sure as the sun rises the odd-lot of tribes currently reigning in Kabul is doomed to fall before the Pashtun factions that are the core of the Taliban. Right up there with "don't get involved in land wars in Asia" (oops!) is "never bet against the Pashtun in Afghan power politics". The critical factor will be the Talibs willingness to be patient and let the Trumpkins distance themselves from this thing, so when the inevitable collapse of the current Kabul regime happens they can wave their hands and make it none of Our Business.

There are also a lot of other people with interests in keeping the Afghan pot boiling, and it will not be simple for the main parties to this agreement to keep them from mucking things up. Various Islamic extremist factions, Afghan tribal interests, Americans who will see this as rightly a recognition that the past 19-odd years have been a complete and utter waste of blood and treasure...

But, frankly, it isn't Our Business; the U.S. has little reason to be picky about who is mulcting the opium trade from the gaddi in Kabul. Provided whoever they are keep the place relatively quiet and regional unrest on the downlow it's a "win" for U.S. interests. When the Taliban is the organization in charge? If they can do that, then more power to them, and us.

Nike employs people who helped kill GIs in Vietnam to make shoes for American feet; why shouldn't Talibs who shot down Americans in the Korengal Valley grow opium for American junkies?

Is this a "good" way to end this mess? Probably not. But, then, there really is no "good" ending, just a selection of bad and worse ones, and this is probably as good as it gets.

Update 3/2: As you might expect, the Kabul government immediately shoved a spoke in this deal, refusing to agree to the prisoner exchange portion.

Plus the Taliban - or some part of the anti-Kabul rebellion - bombed a soccer game almost immediately after a ten-day "reduction in violence" ended. Apparently the Taliban has committed to not whacking GIs but has left the Kabul government fair game.

As Trump famously said about presidenting; who knew this stuff would be so hard?