Breaking the Belt? Leaving the Road?

Andy is one of the few regulars here that keeps reminding us of this, but the current pandemic has brought the problematic relationship between the United States (and much of the "developed world", I should note...) and the People's Republic of China into a harsh light. Fred Kaplan at Slate posted a worthwhile conversation starter here:

"David Livingston, an analyst at the Eurasia Group, notes in an email that while China is not a rich source of raw materials or finished products, it is “a behemoth in the middle of supply chains.” It is in fact the world’s largest exporter of intermediary goods, providing one-third of the “intermediate goods” that help turn raw materials into finished products.

According to a recent report by the McKinsey Global Institute, China supplies the critical components in 70 to 85 percent of the world’s solar panels, 75 to 90 percent of high-speed rail systems, 60 to 80 percent of agricultural machinery, and 40 to 50 percent of cargo ships.

COVID-19 has drawn attention to this grip on the middle of supply chains for health and medical products—a grip that’s tighter than commonly realized. As Bradley Thayer and Lianchao Han note in the National Interest, China produces “key ingredients to medicines in almost every area,” including drugs for Alzheimer’s, epilepsy, antidepressants, HIV/AIDS, and cancer treatments, as well as statins, birth-control pills, antacids, and vitamins. If China stopped exporting these ingredients, they write, “America’s—and the world’s—hospitals would be in free fall.”

The difficulty - as the piece points out - is finding some less fraught middle ground without pushing either nation closer to an open Cold War.

It's tempting to read the problem as an artifact of the sort of bog-standard-fatheaded-Trumpian-"diplomacy" that has produced idiocy like the ridiculous "Love Letters from Pyongyang" Kim-Trump bromance. I think that's heaping too much of the problems on the current Administration; this is a tangle produced by generations-long economic and political miscalculations from the West in general and the US in particular, as well as a false hope that the fall of the Soviet Union (once described to me as "because nobody wanted to wear East German jeans and listen to Bulgarian disco music") could be duplicated by showing the PRC the attraction of Western goodies. Far too long the US has been coasting on the Nixonian engagement policies begun back in the Seventies. The PR has been more than willing to open the doors. It's just not going to let anything in it dislikes - like the idea of a China not run by the current dictatorship.

It's also tempting to look at it as purely a governmental and diplomatic issue without considering the massive role played by domestic US financial and tax policies that encouraged private US corporations to move much of their production to the low-wage nations of East Asia. If corporations are people those people are sociopaths; they typically have no interest in anything other their bottom line. Making the West hostage to Chinese mercantilism? Hey, not my problem! Gotta make the price point on those inhalers and the cheap plastic Walmart crap!

The duplicity - and let's not kid ourselves, regardless of whatever else the PRC did in this pandemic, their initial reaction was horrifyingly similar to that forecast in Max Brooks' World War Z PRC's response to the zombie apocalypse; they tried to hide the outbreak and downplay the severity because that's overwhelmingly often what dictatorships do - of the PRC's government simply points out that as currently constituted the government of mainland China is not anything similar to the sort of state presumed to be a part of the "Western group" of nations.

The fact that the United States is increasingly neither one of those states is neither here nor there in affecting how the rest of the developed world decides to deal with the PRC.

But I think the problem at the heart of the Kaplan piece remains; how? His conclusion is that "...we need to diversify our supply chains, we need a more clever, alliance-driven style of diplomacy, and we need a new president."

Which is all well and good, but...those supply chains are largely in private hands, which will move them only as far as the fattest profit.

And the diplomacy is largely in the hands of that president, who was recently quoted recommending that Americans threatened by a pathogen inject themselves with bleach and swallow UV lights and yet remains the god of nearly 4/10ths of the American public. There is at least an even chance that there will be no "new President" for another four years and change.

Update 4/26: Dan Drezner at Reason has a thoughtful piece that goes into the US-PRC relationship in more detail. In particular it does good work examining the starry-eyed narrative that too many US officials believed would link economic growth and political freedom, as well as the clumsy mess that the Tariff Man has got the relationship into.

However, when he comes to his proposals for solving the mess, Drezner doesn't seem to have all that much more than Kaplan:

"There are areas in which the prospect of weaponized interdependence means that some negotiated decoupling will be necessary. In those arenas, however, the United States will need the cooperation of its allies—because otherwise, China is likely to be the one setting global standards in 5G and other technical areas. The U.S.-China Trade Policy Working Group, a collection of economists and lawyers from both sides of the Pacific, has put forward a framework for managing the relationship. As for coping with predatory liberalism, Adam Silver's change of tune in the face of a media firestorm shows that negative press attention is the best way to get U.S. firms to stop kowtowing to Chinese authorities."

The notion that the Trumpkins will sudden drop their "America First" mania and begin cooperating with allies is risible, while "negative press" seems a weak reed for a world that has gotten used to reading the press equivocating on whether drinking bleach is a bad idea.

So I think we're still very much in the same place. We know there are some things that need to be done about the US-PRC relationship. But what things, and whether the US in its existing condition can or will do them?

That seems very much not so much undecided as largely unexplored.

Update 4/29: It's worth noting that this really is a transnational problem; the Trumpkins' "America First" xenophobia isn't the only source of trouble here. There's much to ponder in this essay (An Old Anxiety in a New Era 1900 & 2020 庚子年的優思 by Zi Zhongyun) regarding the turn to aggressive nationalism on the PRC. It appears that the Xi regime has largely abandoned the pretense of socialist internationalism inherited from the original revolutionaries. In its place - at least, per Zi - is a sort of purblind xenophobia and nationalist rage that would make any MAGA rally look like a kid's playdate. 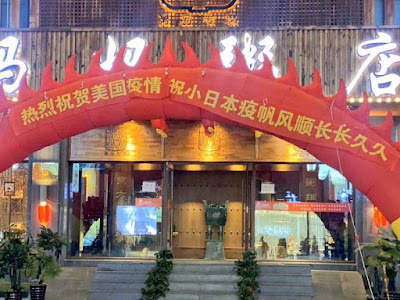 (The banner above the restaurant door reads "Enthusiastically Celebrate the Coronavirus in America; Wishing the Virus a Long and Successful Journey in Japan". Yike.)

"This deplorable situation is only getting worse and, given the kind of unwarranted self-congratulation encouraged by the recent Amazing-China-boosterism [inspired by a swaggering and sensationally popular 2018 propaganda-documentary, ‘Amazing China, My Country’ 厲害了, 我的國], it is hardly surprising that we are now subjected to fabricated stories about how neighbouring countries are supposedly pleading with Beijing to be allowed to merge with the ‘Chinese Motherlands’. [Note: in mid April 2020, articles appeared on the Chinese Internet claiming that Kazakhstan was applying to become part of China. In response, the Kazakh foreign ministry summoned the Chinese ambassador in Almaty to issue a formal protest]. On the global stage stories like this feed an existing anxiety that China is secretly harbouring plans to invade and absorb other nations."

I've heard it said that a diplomatic catastrophe often requires the hard work of the parties on both sides. It would seem that we have just such a situation at hand. 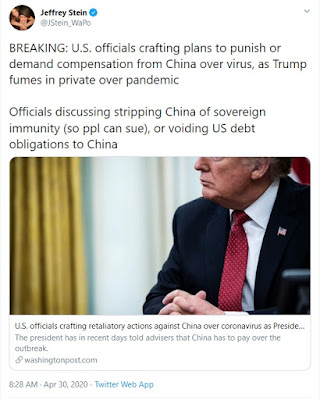 How the hell did they deal with these people in the past? 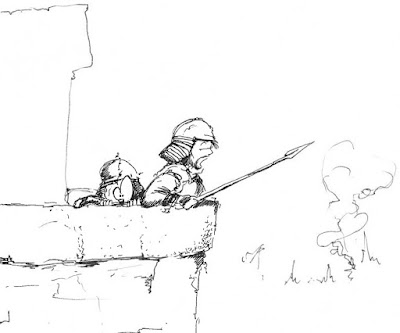 Dave: "We've been through this, Phil. The Mongols are still outside. We can't open the gates yet."

Phil: "But...freedom! I gotta get out. I can't take it. I gotta...I gotta weed the turnips! I left the lights on in the cow byre! I gotta buy another dozen swords!"

Phil: "But...the Mongols have barely killed anyone for days!"

Dave: "That's because of the walls."

Phil: "Are you sure? Maybe the Mongols aren't as dangerous as you said they were!"

Dave: "That is literally the thing they do, Phil."

Good discussion here about what the USS Theodore Roosevelt fiasco shows us about the internal mess that is a now an integral part of "the world's most powerful armed force":

"The response to Crozier’s memo, after it was public, was incoherent. Everybody was saying different things. Modly got on the news and told CNN, We’re working on it, we have a plan in place, which was true because he was in communication with Crozier and his staff at that point. That same afternoon, Modly’s boss, Secretary Defense Mark Esper, got on the evening news and said, I haven’t made any decision and I haven’t read the letter in full. They were nowhere near on the same page. It was the beginning of this massive schism that’s happening right now between civilian and military leadership."

And let's not kid ourselves; it wasn't just the flunkies - this clusterfuck goes all the way up to Head of Grifting:

"Last year, the Navy was roiled by Trump’s call for clemency for Eddie Gallagher, a Navy SEAL who was convicted of keeping war trophy photographs of himself with a dead Iraqi captive. So there was already this sense, when Modly came to the job, that you need to anticipate what the White House wants and carry it out. I think that’s an understanding most administration hopefuls have reached. It could be seen as a bit of a proximate factor for what happened with Crozier."

So as far as "most powerful" goes, while I do not question the sheer weight of metal that the U.S. military has and will continue to bring in the near future, it's worth noting that the track record of military organizations that are beaten into a sort of permanent cringe... 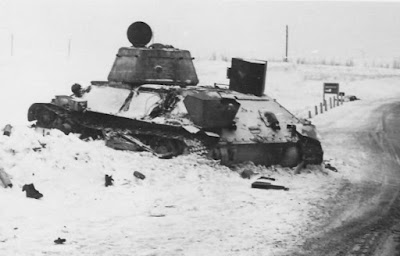 ...by being forced to suck up to the whims of their dictators... 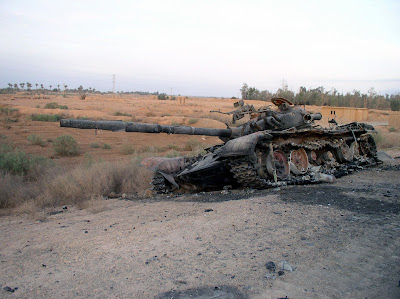 "Pentagon leaders are now at an impasse about how to move forward. While CJCS Milley wants a broader inquiry, CNO Gilday and ASECNAV McPherson want to move ahead with reinstating Crozier. SECDEF Esper may be the deciding vote between the two camps."

Why I say this is interesting is because the CJCS is NOT in Crozier's chain. Remember the little thing I posted about the Navy chain of command?

The Chairman of the Joint Chiefs ain't on it.

The only reason I can see that Milley is sticking his fucking oar in is that certain Trumpkins want to torpedo Crozier somehow but don't want their tiny little fingers on the firing button.

Like I said; the track record of armed forces who begin sucking up to political despots?

And, given the track record we already have from the U.S. performance in Central Asia?