A Fine Kessel of Fish 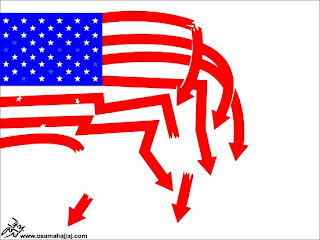 --American Economy, Osama Hajjaj
It's a tragedy
It's a strategy
To prey on contrast
To not indulge fact
Divide, conquer, subcontract
--Sodom, Gomorrah, Washington D.C.,
Anti-Flag

Everybody's talking
and no one says a word
Everybody's making love
and no one really cares
--Nobody Told Me, John Lennon
________________
In World War II, the German Army fought battles called kessels, or "cauldron battles" -- not the greatest fighting position.

Kessels were characterized by a loss of movement and maneuver after decisive commitment, Stalingrad being a prime example: The troops would fight to the last round, then fix bayonets for the final, glorious, assault. We all know how that worked out -- heckuva job, Heinie!

But lo, it looks like our Executive and Legislative branches in Washington are fighting their own cauldron battle after being bypassed and surrounded by economic forces that are whipping them and us just as badly as the Russians whipped the Nazis in 1943-45.

The Battle of the Cauldron 2011 will not solve any of our problems or add to our ability to maneuver back to a position within a secure battle line. Our leaders are aiming friendly fire at divergent elements within the kessel. The enemy is romping and stomping past them in columns of hordes, yet they prefer to direct their fire inwards, a stance so contrary to soldierly behavior as to defy the imagination.

The budget cap does not address that which affects our daily lives, which is the diminution of our freedoms and our economic well-being. Leaving the debt ceiling in place does not get us out of the cauldron -- it just pushes the day of reckoning down the line. The debt has risen exponentially since the George Bush administration; it will still balloon, simply at a slower pace . . . to a time past the 2012 elections, when another "cast of characters is sent back to Sodom to do the people’s business." (The Debt Deal: Disaster Averted, Decline Straight Ahead).

The issues are so immense that we ignore them while entertaining ourselves with meaningless diversions. The U.S. is like the German Army of 1943 on the Russian Front: We are about to be forced on the strategic defensive, while our leaders prefer to fight battles that cannot be won or stem the tide.
Posted by rangeragainstwar at 12:01 PM