As an afterhought to jim's posts about the lack of strategic thinking in our civil government (i.e. the fairly clear evidence that if our political "leaders" were to be drafted less than a handful of them would have the mental horsepower to make a corporal competent enough to lead four privates to a whorehouse and issue instructions on the tasks, conditions, and standards expected of them once they got there) I thought I'd point you towards this interesting essay from John Robb. Here's his money graf:

"...an extreme concentration of wealth at the center of our market economy has led to a form of central planning. The concentration of wealth is now in so few hands and is so extreme in degree, that the combined liquid financial power of all of those not in this small group is inconsequential to determining the direction of the economy. As a result, we now have the equivalent of centralized planning in global marketplaces. A few thousand extremely wealthy people making decisions on the allocation of our collective wealth. The result was inevitable: gross misallocation across all facets of the private economy." 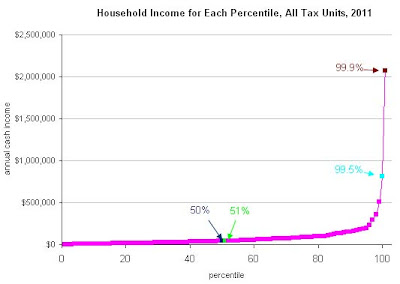 I don't always agree with Robb, but he may be on to something here. Certainly the mess we're making in our response to the Great Recession - with the experience of the original Great Depression right before out faces - suggests more than just incompetence. You'd almost have to suspect deliberate ignorance, arrogance, and ideological purity as culprits.

Although perhaps we really ARE that stupid. It's SO hard to tell...
Posted by FDChief at 3:19 PM