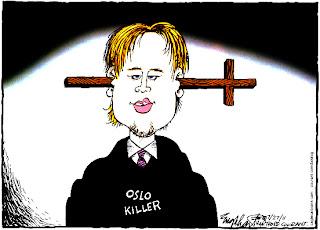 The murders were premeditated and also fit the definition of terrorism as the shooter wanted to reach a target beyond his immediate victims. Shooter Anders Breivik believed he was at war, and even labelled his murder victims as unfortunate collateral damage in his war scenario. His attorney says Mr. Breivik is nuts.

The cows have come home to roost (thank you, Latka) when Mr. Breivik states that he thinks he is "in a war", for he resembles no one so much as the entity known as the United States in his belief. You can call terrorism "war", but that doesn't make it so:

"This whole case has indicated that he's insane," Lippestad told reporters in Oslo, saying Breivik believes he is leading an anti-Muslim revolution to overturn Western governments and that the victims from his downtown Oslo bombing and Utoya Island shooting rampage were casualties of war.

Since the opening salvo of the Phony War on Terror (PWOT ©) we at RangerAgainstWar have said that terrorism or the reaction to terrorism is not equated to warfare. TERRORISM ≠ WAR.

Terrorism, whether on the idyllic Norwegian island of Utoeya or the World Trade Center is simply an act of craven criminality. Terrorism is not warfare, yet we have a right-wing crazy in Norway who believes that it IS warfare; we call him INSANE, while the entire foreign and military policy of the U.S. government is based upon Mr. Breivik's logic.

George W. Bush's presidency was predicated upon his being a "wartime president", with Obama gladly following in his footsteps. Why is Breivik insane, while GWB or Obama are considered steady as rocks?

If a lie is told often enough and loudly enough, somebody is bound to believe the message. A bad German said that when promoting a bad war.
Posted by rangeragainstwar at 9:37 AM