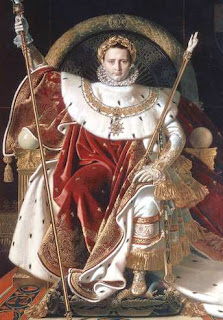 EMPIRE is a term which is often used today to describe US policies, or rather specifically reactive US domestic and foreign policies since September 11, 2001.

To analyze this properly we need a clear ideal type as to what "Empire" is, what makes it distinct from say "the State", which is the usual apparatus of control for political communities. In 2005, Dr. Herfried Münkler published a book entitled Imperien, which was published two years later in English as Empires. I will refer to the English translation in order to present Münkler's ideal type of Empire. Münkler's a professor of political theory which is a broad discipline which would include not only Clausewitzian strategic theory but the political theories providing context to it. He has been described as a "one man thinktank" and deserves a wide dissemination of his ideas.

Once we have an ideal type as a yardstick, we can then compare it to what we see in reality and present those views for discussion. My goal here is to create a dialectic whereby through presentation, question and response we all attain a higher appreciation and understanding of this current political phenomenon which affects the entire world. Since we have had whatever varying success with this type of discussion numerous times here on MilPub in the past, I have every reason to assume that we will do so again this time around.

Everyone reading is welcome to comment, in fact I would specifically encourage some of the great number of silent readers we have to express their views . . . Such comments/questions could be about the strengths or weaknesses of Münkler's ideal type, or how effectively it describes specific political entities today . . .

Now to Münkler's ideal type. The elements should be clear and well-defined, expressing extremes of various sorts. Ideal types are not found in reality, but contain exaggerated characteristics found in reality. There is also no morality associated with the "ideal" in ideal type, one could describe an ideal type whorehouse or political machine. I refer here to pages 5-8 in Empires:

Quotes from the book are within "--".

First, an empire must be distinguished from a state, or more precisely, from an institutional territorial state, which operates according to completely different imperatives and a completely different action logic. This begins with the way the population is internally integrated and extends to how boundaries are conceived. the boundary line typical of states is sharp and clearly demarcated; it indicates the transition from one state to another. Such precise dividing lines are exceptional in the case of empires. To be sure, the boundaries of an empire are no longer lost in those wide expanses in which tribes and nomadic peoples sometimes obeyed imperial requirement and sometimes resisted them, but even since the disappearance of those unruled spaces into which the classical empires were able to expand, imperial boundaries have remained different from state borders. Imperial boundaries do not divide political units possessing equal rights; instead they involve gradations of power and influence. Moreover, in contrast to state boundaries, they are not equally permeable in both directions; those who wish to enter an imperial space must satisfy different conditions from those who leave it. This is connected to the economic as well as the cultural attraction of imperial powers; more want to enter than to leave, and this has consequences for the border regime. --

Or in a nutshell -- Empires have no neighbors which they recognize as equals, that is as possessing equal rights; with states, by contrast, this is the rule. In other words, states are always in the plural, empires mostly in the singular.--

Second, but related -- States integrate their populations equally, above all, grant them equal rights whether they live at the core of the state or in its border regions - this is not the case with empires: there is almost always a scale of integration descending from center to periphery, which usually corresponds to decreasing right and an increasingly limited capacity to determine the politics of the center.

Third, empires must be delineated in contrast to hegemonic structures of dominance. The line between hegemonic supremacy and imperial dominance may be fluid, but it is still meaningful to distinguish the two. Hegemony is supremacy within a group of formally equal political players; imperiality, by contrast, dissolves this - at least formal - equality and reduces subordinates to the status of client states or satellites. They stand in a more or less recognized dependence in relation to the center.

Fourth, empires may be delineated in contrast to what has since the 19th Century been called imperialism. A distinction between theories of empire and theories of imperialism makes it possible to disregard the normative perspective of nearly all theories of imperialism and to sharpen our descriptive-analytic focus on the imperatives of empire. The concept of imperialism also includes theories of empire-formation as a unilateral process running from center to periphery; which proves to be rather a hindrance in the observation of real empires. Imperialism means that there is a will to empire. Whether from political or economic motives, this is seen as decisive, if not the only, cause of world empire-building. . . [However] most empires have owed their existence to a mixture of chance and contingency, often taken up by individuals who were in no way legitimately authorized to do so. In that sense, almost all empires have been created 'in a fit of absence of mind'. A focus on the center, characteristic of imperialism theory, must be supplemented with a focus on the periphery - on power vacuums and economic dynamics, requests for intervention by losers in regional conflicts and decisions made by local authorities. --

I'm adding a fifth characteristic, which Münkler does not place here, but describes later (page 84 & 96). Fifth, -- All empires that have lasted any length of time have chosen as their self-justifying objective a world-historical task or mission that confers cosmological or redemptive meaning on their activity. Hegemonic powers do not need a mission, but empires cannot do without one. . . The persausiveness of an imperial mission depends to a large extent on the discursive construction of what it is directed against, or which forces it is meant to keep from becoming politically dominant. This will here be considered under the generic term of the barbarian of the barbaric . . . Imperial frontiers are thus also frontiers between cosmos and chaos.

So, that's my initial ideal type based on Münkler's Empires.

We really seem to be at something of a crossroads. There is in general a resistance to taking on board the significant, even fundamental changes that have take place in the country since 2000. It's always easier to simply tell ourselves that this has "all happened before", but does that really stand up to any serious scrutiny? I find it more the need to find some commonality, some sense of bearings that could indicate where the country will go from here.

It's scary to think, as I do, that we are in essentially "uncharted waters". More to follow.
Posted by seydlitz89 at 4:39 AM