A Couple of Things in August 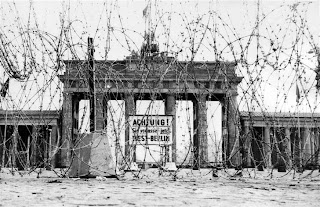 On vacation, at home, trying to achieve that balance between relaxation/necessary work/creative endeavor. A couple of things have come to mind in the last few days.

First off, we have the 50th anniversary of the building of the Berlin Wall in August 1961, which took the Western Allies in Berlin by surprise at the time, although it shouldn't have. The situation was very tense 50 years ago in Berlin and this tension lasted, if in a lesser degree, to the time 28 years later when the people brought that wall down. So, what was initiated by a state with with limited popular support (based mostly on a grotesque view of the "other") lasted only as long as the people it was meant to control submitted themselves to that control (that is Weberian social action theory). It took 28 years, but it happened which is the point to remember.

There are also those who argue that the whole thing was overblown, that the Soviet Army would never have attacked, that "all they wanted was peace", or "their economy was going down the tubes" ,or amazingly, that it was our military budgets (spending) which drove the USSR over the edge. It's amazing how so many people see these arguments as believable and at the same time today believe in a Global Jihadist Threat. That is the full spectrum of views in regards to the USSR unite in one simplistic view regarding the Global War on Terror.

So to make it even clearer, the USSR as a qualified threat (actually a potentially existential threat) which required certain changes in our government structure (the establishment of the National Security State after 1947) but virtually none in our Constitutional or legal systems, whereas Al Qaida's actions since 2001 have initiated a whole series of drastic (and sometimes illegal) changes in virtually every aspect of our society? Yet in what way is Al Qaida any sort of threat in the way the USSR was?

Recently a documentary was aired in Germany which addressed the Warsaw Pact plans for the conquest of West Berlin which was in turn the subject of a large East German Army field exercise in 1988, that is a year before the wall came down. It's actually a common element in corrupt elites which are on the verge of collapse, that is the consideration of the use of military power to some how remedy the situation, turn things around, remove the pressure to "reform", that is respond to public pressure. Obviously the government of the German Democratic Republic felt secure enough in 1988 to have this as an option, the people were "manageable" enough in terms of propaganda, fear, incentives and what ever other elements of power/inducement the state could muster.

What made a difference at the end of the Cold War, was of course the top man on their side, M. Gorbachev, who was a great human being, but a lousy Communist. "Communist" defined in terms of perpetuating the interests and power of the Communist elite, much as we would define our own leadership/elite today.

Consider how Eastern Europe with a worn out and discredited social/economic system in 1989 compares to the West - and especially the US - today?

So that's one thing.

The other is a response I got on one of FDChief's threads. I commented this to Andy:

"I think most serving in the armed forces today would disagree with your characterization that they are "imperials." "

Agree, but what is the actual effect of what these American "warriors" are doing? Some would argue this is all about empire, or would you argue that there actually exists a "global threat" which requires our military actions on such a scale as a response?

Are we on the defensive or the offensive? Is the enemy a threat to our "freedom" or simply responding to our depredations? A very basic question from a strategic theory perspective; I suppose it comes down to that . . .

Andy was kind enough to respond:

That's a good point, but these wars aren't "imperial" simply because they are strategically incoherent. If we were installing Viceroy's in Iraq and/or Afghanistan and granting US corporations exclusive rights to territorial resources, then I'd think these would be "imperial" wars. We would have a clear purpose that would, theoretically at least, provide us a clear and material benefit.

What have we gained? What is the purpose? IMO, as I've said before, I think these are now wars of national honor and the reason we are still there is that our politicians think they can't leave without a clear "win" and the American people don't want to suffer the perceived psychological consequences of a Vietnam-like "failure." The sunk-cost fallacy is also at work.

After a bit more thinking, I'll add this to my earlier thoughts: Maybe it's an artifact of the AVF, but for me and most people I know, service is in large part about "serving the nation" and the deal is that if you want to serve the nation, you don't get to pick and choose your wars. Almost everyone today, including me, continue to serve by choice despite misgivings about our current conflicts (obviously, my misgivings are not everyone's). Each individual, therefore, has to balance whether service is worth the downsides, whatever those downsides may be. For most people, continued service is not worth the cost and they either choose not to join at all or serve one or two hitches.

So I guess it strikes me as - not sure how to put this - "unfair" to suggest that the sacrifice these men made is somehow diminished because the campaign they fought and died in didn't rise to someone else's arbitrary level of righteousness. I have a hard time entertaining the notion that the sacrifice of a soldier in WWII who was accidentally killed by by his own troops is somehow greater or more honorable than those guys in the 47, or the soldier in Iraq who dies to save his men. Everyone has their own opinion and I'm not claiming any moral high ground here, but for me personally I feel completely unqualified to make such judgments.

I think Andy's comment very articulate and informative, but communicating something else then what he intended, possibly. I assume no agendas/political views beyond the content of this single comment, rather simply separate and develop the points made.

First, my questions were addressed to a citizen/the citizenry of the political community called the USA, not to the troops who go where they are sent. If these military members serve the nation, then it is the responsibility of the citizenry that the political leadership (in theory our elected representatives) ensure that they are actually operating in the interests of the US. An elite that arbitrarily uses the powers of the state for their own narrow interests is by definition a tyranny.

Second, while the US political purpose is "incoherent" it is not blatantly so - no "Viceroys" ruling in our name - and the series of wars seemingly provide no benefit to the nation at all. That is where this consideration ends, though without considering that the wars in question might actually support the interests of the elite, while providing the nation with no benefit, are in fact contrary to our political community's interests. This of course within a context of constant government deception and propaganda, in effect selling this necessarily ambiguous threat as "existential". This in turn would indicate a very serious state of affairs, the collapse of the concept of citizenship, accountability of elected officials, consideration of the long-term effects of what is carried out in our name, how our policies might actually bring about the "war of civilizations" hornets nest we insist on beating . . . the questions only become more serious as you follow this line of thought . . .

Third, it seems that this view argues that as long as the military assumes the war passes whatever their own subjective smell test is, it will continue, since by continuing the military "serves the nation" and upholds its own "honor". For those military members unable to deal with this, they get out after "one or two tours". That is it is only those career military who actually count.

Finally, arguing against these wars is simply exercising an "arbitrary level of righteousness" against, not the political leadership, they enter into this discussion not at all, but against the military: that is "attacking the troops".

In all I would label his view, "21st Century US militarism" which indicates for me a collapse of all our traditional ideals of the citizen, the political leadership, the military and even the use of state force itself.

Postscript (from one of my comments below):

--We're talking a lot about symptoms, but not much about causes. If we go to the actual root causes then I think we get an idea of the extent of the crisis facing not only the US, but also the West (but to a lesser degree).

Systemic failure due to elites who simply cannot divorce themselves from the Weltanschauung which educated, formed and conditioned them and has been shown to be dysfunctional, incapable of reform or even acknowledging the extent of the crisis.

Obama is a product of the same elite system of education and indoctrination. He vacations on Martha's Vineyard since that is where the East Coast elite go and he wishes very much to signal that he is one with that elite. It's not based on race or ethnic background, but on class and sharing the same background which is the glue that holds the whole thing together.

The same Ivy League idiots who ran the economy off a cliff are retained and rewarded since there are no others to replace them with. This crop would be replaced with the same systems managers who caused the last big crack up.

Ditto with every major institution we have - the military included - the same thinking but from the service academies.

Our elite cannot deal with systemic failure because simply they are NOT even aware they are dealing with a failed system, rather for them this is the one and only "reality" and scary brown people who "hate our freedom" are definitely part of it.

I think those who see this disaster more clearly also have a coherent system of values. I know that word has been debased for decades, but consider what I'm talking about is not "right" and "wrong" but a coherent structure. This was common in the past, btw, in all healthy societies. Values are not what make us "feel good about ourselves", but give meaning to our world. Many times we have found ourselves not living up to our own values, which is the opposite of the sanctimonious buffoonery (actually narrow self-centered interest) common today. These values reflect in turn our belonging to a larger community, and it is in many cases this poor reflection which discourages us perhaps the most.

The country has changed or rather has been changed, but we have not, nor will we. Imo the growing conflict in the US today is not between "Left" and "Right", or "Liberal" and "Conservative", but between the elite and their stooges (both Obamaites and Right Wing Nihilists), and the anti-elite, which is a diffuse and reactionary movement. Given the disparity of power, the best strategy - as we have spoken about before - is one similar to that taken by the peoples of Eastern Europe prior to 1989 . . .

Essentially we are the anti-elite . . .