The Lament of the Frontier Guard

By the North Gate, the wind blows full of sand,
Lonely from the beginning of time until now!
Trees fall, the grass goes yellow with autumn.
I climb the towers and towers
to watch out the barbarous land:

My friend jim recently posted an extended rumination about the combat loss of a CH-47 and the embarked team of Navy SEALs. In this post he uses President Obama's term "sacrifice" to compare the way these men died to the offerings presented to the gods; in this case, the twin gods of War and Hubris that have ruled lately in the East. He asks "How can a nation sacrifice the best that we have to offer in such a blithe manner?" and suggests that these dead men were sacrifices for our national sins of arrogance and foolishness. 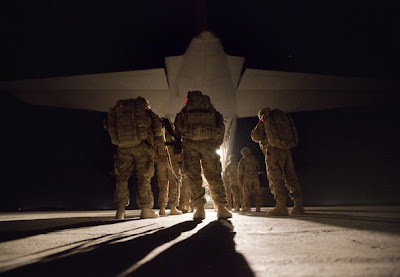 Now I have no end of respect for jim's opinions on things military. He's been there and done that and got the O.D. T-shirt. He's probably forgotten more about soldiering than I'll ever know.

But in this case, I think he's looking at this as an American and a citizen-soldier, and that's the wrong way to look at this.

Desolate castle, the sky, the wide desert.
There is no wall left to this village.
Bones white with a thousand frosts,
High heaps, covered with trees and grass;
Who brought this to pass?
Who has brought the flaming imperial anger?
Who has brought the army with drums and with kettle-drums?
Barbarous kings.

For most of these guys the Saturday in Wardak Province was just another day at work. They are long-service professionals - imperial troops in all but name - and they are doing what imperial troops have done since Augustus' day; carrying our imperial policy in the far reaches of the imperial frontiers.

This was no army of liberation storming ashore on the beaches of Normandy or Italy, no army of vengeance pouring gasoline into the caves of Iwo Jima and Okinawa. This wasn't even "Lafayette, we are here" or "Remember the Maine". While I'm sure that one or two of the guys who augered in somewhere in the Tangi Valley comforted themselves with the fiction that they were avenging 9/11 I'll bet most of them thought about their mission as imperials have always thought about the mission of civilizing the savages with a rifle. 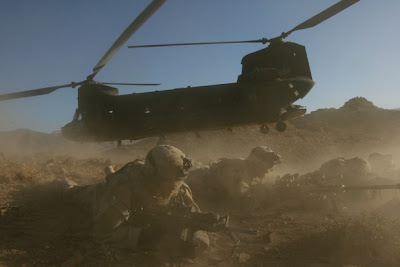 Long, tiring work, typically boring, occasionally terrifying, often fruitless. Pitied and ignored by the civilians safe at home, feared or swindled by the natives nearby, tasked by the uninformed higher-ups to perform everything from the pointless to the dangerous, taking successes wherever and however possible, accepting failures as part of the game.

A gracious spring, turned to blood-ravenous autumn,
A turmoil of wars - men, spread over the middle kingdom,
Three hundred and sixty thousand,
And sorrow, sorrow like rain.
Sorrow to go, and sorrow, sorrow returning,
Desolate, desolate fields,
And no children of warfare upon them,
No longer the men for offence and defence.

And I believe we do them a disservice when we use the language of popular mass wars for what they do and how they die. The President, of course, well, it's his job to drape the charred bits of meat and bone - all that remain after JP-4 and airframe aluminum combine to combust human bodies - in patriotic bunting. He is, after all, both our national mourner and national cheerleader, saying the correct and solemn words over the caskets filled with sand, fanning the fire in the faint hearts to continue the fight that will bring more dead men home to more bereft hearts.

But we should be big enough to overlook these public platitudes and see these men for what they are; imperial legionaries of a most unimperial empire, manning the milecastles we build for them with our taxes, our reflexive rage, our incurious sloth, and our ignorance of the world and the people in it.

Those dead men, could they reassemble themselves, could they pull the poncho-liner of whole flesh back on so as not to frighten us with the gibbering horror of their deaths in a rage of fire and metal, might tell us of the people in those far places who killed them and whom they killed, the broken places and the broken tribes within them, whose ferocities and griefs they and we will never understand. They might tell us about the meaningless strobing of parachute flares in the night sky, of little villages with yesterday's bulletholes in walls that Alexander's troops passed by, of walking over the same ground they walked yesterday and finding new death buried by the roadside.

Because there is no way we in the soft lands and the quiet places could understand what it means to try and defeat the 14th Century with the weapons of the 20th.

Ah, how shall you know the dreary sorrow at the North Gate,
With Rihoku's name forgotten,
And we guardsmen fed to the tigers.

Because they are atop the milecastles, peering out to the barbarous lands, and we are peacefully asleep in the fat lands within the walls. Because they know war and we do not. Because they are not our sacrifices; they are our proxies. Because, although we have never seen a tiger or know what it does...

...we feed them to the tigers. 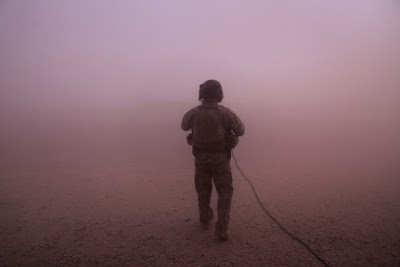 And then go home to our dinners.
Posted by FDChief at 11:46 PM