Narratives . . . Or the Lack There of 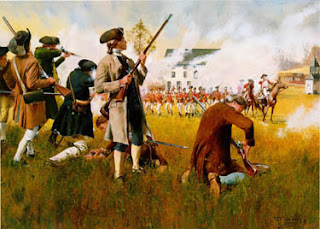 Discourse is the beginning of a society, a conversation between members of that group. Founding stories or narratives of how that discourse began and what was said make up a "founding narrative" which we as a group build on from there. America has a founding narrative and a series of narratives that have been added on since. Stories of course are not actual factual accounts, since nobody remembers an event exactly the same way, each has his own perspective and what they thought most important and least important and rarely do those points all match across a group.

Still a common narrative holds a political community together, gives it a past and a current purpose.

When narratives begin to get confused, drowned out by the massive Wurlitzer of propaganda, or when language takes on new meanings to obscure narrow interest (as Thucydides showed us in his classic history) society starts to break down. If this is not arrested, if a coherent narrative is not able to gain ground, then perhaps dissolution is the unavoidable result.

I came across this which ya'll may find interesting . . .

In that context, Americans needed their president to tell them a story that made sense of what they had just been through, what caused it, and how it was going to end. They needed to hear that he understood what they were feeling, that he would track down those responsible for their pain and suffering, and that he would restore order and safety. What they were waiting for, in broad strokes, was a story something like this:

“I know you’re scared and angry. Many of you have lost your jobs, your homes, your hope. This was a disaster, but it was not a natural disaster. It was made by Wall Street gamblers who speculated with your lives and futures. It was made by conservative extremists who told us that if we just eliminated regulations and rewarded greed and recklessness, it would all work out. But it didn’t work out. And it didn’t work out 80 years ago, when the same people sold our grandparents the same bill of goods, with the same results. But we learned something from our grandparents about how to fix it, and we will draw on their wisdom. We will restore business confidence the old-fashioned way: by putting money back in the pockets of working Americans by putting them back to work, and by restoring integrity to our financial markets and demanding it of those who want to run them. I can’t promise that we won’t make mistakes along the way. But I can promise you that they will be honest mistakes, and that your government has your back again.” A story isn’t a policy. But that simple narrative — and the policies that would naturally have flowed from it — would have inoculated against much of what was to come in the intervening two and a half years of failed government, idled factories and idled hands. That story would have made clear that the president understood that the American people had given Democrats the presidency and majorities in both houses of Congress to fix the mess the Republicans and Wall Street had made of the country, and that this would not be a power-sharing arrangement. It would have made clear that the problem wasn’t tax-and-spend liberalism or the deficit — a deficit that didn’t exist until George W. Bush gave nearly $2 trillion in tax breaks largely to the wealthiest Americans and squandered $1 trillion in two wars.

And perhaps most important, it would have offered a clear, compelling alternative to the dominant narrative of the right, that our problem is not due to spending on things like the pensions of firefighters, but to the fact that those who can afford to buy influence are rewriting the rules so they can cut themselves progressively larger slices of the American pie while paying less of their fair share for it.

But there was no story — and there has been none since. . .

Read the whole article, even if you don't agree with it. It's an attempt at something we could all use, perhaps.

I'm currently working on a strategic theory paper about Martin Luther King's strategy of non-violent direct action. In his book, Stride Toward Freedom, he wrote in 1958:

The racial issue we confront in America is not a sectional but a national problem. The citizenship rights of Negroes cannot be flouted anywhere without impairing the rights of every other American. Injustice anywhere is a threat to justice everywhere. A breakdown of law in Alabama weakens the very foundation of lawful government in the other forty-seven states. The mere fact that we live in the United States means that we are caught in a network of inescapable mutuality. Therefore, no American can afford to be apathetic about the problem of racial justice. It is a problem that meets every man at his front door. The racial problem will be solved in America in the degree that every American considers himself personally confronted with it. Whether one lives in the heart of the Deep South or on the periphery of the North, the problem of injustice is his problem; it is his problem because it is America's problem . . .

Today in all too many Northern communities a sort of quasi-liberalism prevails, so bent on seeing all sides that it fails to become dedicated to any side. It is so objectively analytical that it is not subjectively committed. A true liberal will not be deterred by the propaganda and subtle words of those who say, 'Slow up for a while; you are pushing things too fast.' I am not calling for an end to sympathetic understanding and abiding patience; but neither sympathy nor patience should be used as excuses for indecisiveness. They must be guiding principles for all of our actions, rather than substitutes for action itself. pp 193-4

It's time we got back to basics imo, basic political questions as to how we wish our government and our society to be . . . or not be.
Posted by seydlitz89 at 2:54 AM