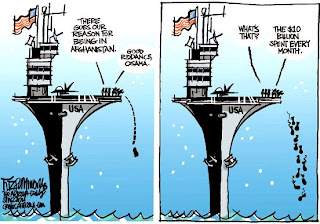 Don't start me talking
I could talk all night
My mind goes sleepwalking
While I'm putting the world to right
Called careers information
Have you got yourself an occupation?
--Oliver's Army, Elvis Costello
_________________
The death of West Point military cadet Jacob D. Bower last Thursday while on a land navigation exercise (22 July 11) indicates a lack of leadership at the small unit level (West Point Cadet Dies During Training).

Why didn't they use buddy teams? Was the troop properly acclimated? Was there a heat index alert? Why not train at night to avoid heat casualties? Were water bags out? Was water at the training points? This was SOP in Ranger's day. Have we lost our military knowledge, which is nothing but common sense?

Was this a normal compass course or was it an orienteering endeavor? In a high heat situation, orienteering would be inherently hazardous and strict supervision would be standard.

Ranger recently read the book, "Small Unit Leadership -- A Commonsense Approach" by. Col. Dandridge M. Malone (ret'd)., and the recent death of cadet Bower pointed out what was missing from the text. Though mission and winning the land battle were well-covered, getting the soldiers to that point was not addressed; leadership is about more than winning battles. It is also about knowing when to pull the plug and admitting that the mission cannot be achieved with the available assets.

Unfortunately, the military does not award Medals of Honor for this type of leadership. What passes for military leadership can often be equated with mental aberrations as Soldiers are often tasked with performing irrational actions. Something like assaulting an interlocking bunker complex is not a sane act in any universe, yet it is seen as leadership in the Army.

Ranger realizes the exigencies of combat and the unit level requirements to fulfill organizational needs, but what is called bravery often does not lead to any national gain, and leaders are often pressed to choose the heroic-seeming action. If the West Point cadre allow such negligence in overseeing training, can it be any better in the "Real Army"?

Ranger's questions outstrip the purview of Col. Malone's book, but the needless death of an 18-year-old cadet demands they be asked.
Posted by rangeragainstwar at 9:04 AM