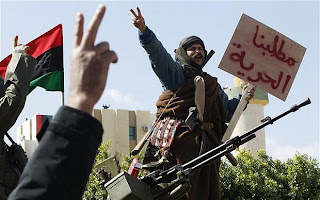 Or no surprise at all given the current state of US strategic thought . . . if this is any indication . . .

. . . For most of history, war was a contest between more or less like military forces. Defeating the enemy usually meant defeating his armies as a precondition for victory. Of course, insurgencies were as old as war. And, of course, insurgencies had relatively fixed geographic boundaries that, after the Duke of Wellington's brilliant peninsula campaign during the Napoleonic Wars, became known as guerrilla or small wars.

The American way of war remains firepower intensive. We won World War II, with the Soviet army, literally blowing away the Wehrmacht with our superior firepower.

As technology improved dramatically, so did mobility and maneuver. The Iraqi military was shattered twice by this onslaught first in 1991 and then a dozen years later. And the initial and stunning success in Afghanistan in late 2001 demonstrated the effectiveness of this technology in support of Northern Alliance ground forces in routing the Taliban, at least for the moment.

Unfortunately, Clausewitz's genius has been partially trumped by a critical question: How do even amazingly capable military forces defeat an adversary who lacks an army and uses insurgent, terrorist tactics, metastasized by a radical ideology in which suicide is a preferred weapon while possessing global reach manifested by the September 11th and other attacks against the U.S. and European allies? . . .

The British and their little wars, the US in the Philippines and much later in Vietnam, the Russians in Afghanistan . . . but we could go back to Clausewitz's time as well and find the same thing. Napoleon went into Spain and Russia with the best army in the world at that time and was defeated in the end by decidedly second-rate forces. Even the Wehrmacht in WWII easily defeated the Yugoslav army in the spring of 1941 only to be faced later with Partisans who continued on the fight. Ullman's view of WWII is flawed. Sure the Red Army ground the Germans down, but at a terrible cost, perhaps five men for every German soldier they put out of action. Could our successes in Western Europe in 1944-45 have been achieved without this great blood letting, the recourse to "grand attrition" on the part of the Russians?

The invention of gunpowder allowed for distance between combatants, war was no longer necessarily up close and personal. Any additional technological improvements have not quantitatively changed that fact. War and killing have had a remote quality for some time. Is there much difference in this regard between "Big Bertha" in 1918 and the Creech Air Force Base drones of today? We're talking about an improvement of targeting perhaps, but not really a new way of war.

War remains subordinate to politics since it is politics which gives birth to war. The recent failures are all explainable in Clausewitzian terms, which is an uncomfortable fact for people like Mr. Ullman who would rather ignore the current political realities . . . and assume that we have blundered in to some new era of warfare. Sorry, but it has all to do with politics and we ignore that basic human fact at our own peril.

The US recognizes Libyan rebels . . .