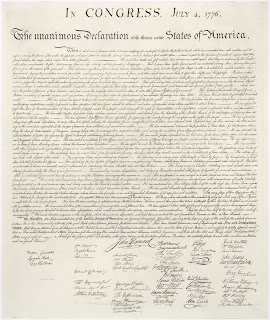 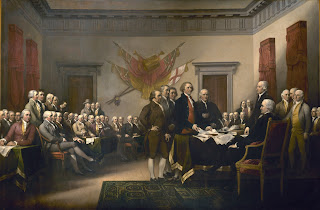 Check these dudes out. They are soooo yesterday. Anybody think they'd ever make it on "American Idol" or "Dancing with the Stars?" Didn't think so. Yet these are my heroes. A small collection of men (sorry, girls, it was men only: you weren't allowed to play with the big kids in those days) who literally changed the world. It's because of them that people are allowed to make fools of themselves in public and the rest of are allowed to kind of step up and say what we want to say. There is a good chance that this blog wouldn't exist, that the Internet wouldn't exist, were it not for these stuffy old white guys, the guys that various "enlightened" universities have deemed not relevant to their students' studies.

Ah, but these dead white guys are all so relevant. They produced this crazy, weird, remarkable document and they threw in the face of the reigning superpower in the world. In yo' face, England. They signed it and they didn't hide. They signed off with their true names and were prepared to bear the consequences. Then came a war, a minor war by our standards today, but a major war nevertheless. These guys and the colonials who believed in them actually threw the King of England out. You're out of here, George. And it stuck.

The declaration was actually signed on July 2d, but we ended up with a date two days later for our birth date as a nation. Doesn't matter. What does matter is that we as Americans actually got off on the right foot. And for a whole lot of years, this bold action by these boring old dudes inspired millions of people around the world.

But we don't do it any more. We inspire nobody. We are not inspired, we are old and tired. There is no revolutionary spirit left in our nation. Look at the Declaration, at how brief and how bold it is. We now live in an era where laws passed by our legislature often contain thousands of words and need to be parsed by hundreds of lawyers and judges. Look again at the Declaration. You can read it in almost no time. Same with the Constitution, which rolled out thirteen years later.

This is my first post in quite a while. In fact, I noted that my old friend the Ranger suggested that some of us be drummed from the rolls. Maybe Ranger's right. I observed on FDChief's last post that Andy, one of my favorite contributors, noted that he's not doing much any more, either. This is a difficult time for all of us. I've not been blogging recently mainly because I've had little to say. Everybody who's been reading me for the past six or seven years knows where I stand. Ranger is different. He is a firebrand and I admire him greatly for that. He is Sam Adams or Patrick Henry. Me, I don't know who I am. Mr. Jefferson is a cousin, but I would never presume to put myself in that league. One of the back benchers, probably. But I would have signed it.

An good friend just up and died on me last week. Don Barlow, USMA class of 1957, retired as a colonel and was my neighbor and good friend. Fortunately, he went fast. He did world wide travel with his wife and had just gotten back from a trip to Vietnam. I asked him, "Don, didn't you get enough of that place?" He said, "well, did it for the wife, and I was kind of curious as to how the place turned out." He didn't like it, but he also didn't think it would have been any better under our guys. Don didn't really think that all of our frantic running around the world, our huge military commitments and all of that amounted to much at all. And there's our revolutionary message for the day. Those boring old dudes knew that the nation they'd birthed would be a great nation. They knew geography and they knew what would happen on this continent. Hard to imagine that they would view the events of the past 50 years with anything other than scorn.

So I made a toast to Don, "here's to us, and those like us, damned few left." And I make the same toast to my fellow bloggers and to our faithful commenters. You're a fine bunch of folks. I appreciate all of you. Hope you all had a great holiday weekend.
Posted by Publius at 6:15 PM