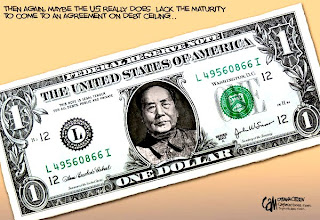 An example is the current brinksmanship over a few trillion dollars and the debt ceiling, as though our existence hinged upon this amount. We languish while a recent Brown University study estimates the final bill for the Iraq and Afghanistan adventures at $3.7 to 4,4 trillion (and the fat lady is not gonna sing anytime soon.)

Buried in yesterday's Wall Street Journal was a comment that NATO will continue bombing Libya because Muammer Qadaffi has no legitimacy. Did Qadaffi ever have legitimacy in this or any other arena? If then, why not know?

Page Two explains that Afghan President Karzai quickly appointed another half-brother, Shah Wali, to replace the government post vacated by his now dead half-brother Ahmed Wali (Karzai Appoints Brother in Kandahar). It seems the endless supply of Wallys will secure the Karzai's control of the Kandahar region. Now that is democracy in action; thank you, America!

So, we are bombing the hell out of Libya because its leader lacks legitimacy, while concomitantly supporting the illegitimacy of one of the most corrupt governments on the face of the earth. In one scenario we kill to oppose illegitimacy; in another, we kill to support it.

Why do Americans grind their teeth over the debt cap while having no difficulty throwing away $trillions in foreign shit holes?

Where is the sanity? After taking my meds and settling into my Ikea Poang chair, the idea hit Ranger like a ton of bricks: "What's the big deal?" It was not exactly a Thich Nanh Hanh moment, but it was clarity nonetheless. So some drug-dealing, nepotistic person is getting one over on all of us taxpaying U.S. citizens paying for a hypocritical, insane war. What do I care, except that we are back to $trillions spent and a whole lot of people fucked up in the process, which in my book is a good approximation of national insanity.

Didn't we do a similar tango here in Florida in the 2000 Presidential lotto? In our version, Governor Jeb Bush handed the presidency to his brother George W. Bush. Again, what is the big deal? A lot of sound and fury, but the result is a foregone conclusion. How can we criticize the Karzai cabal (Kabul) when the U.S. uses the same playbook?

Even here amongst my esteemed fellows, we discuss strategy, logic and leadership as though they are present for duty in the National Command Authority. Perhaps those are not logical assumptions.

Insanity may be a coping strategy in America today.

Posted by rangeragainstwar at 2:14 PM