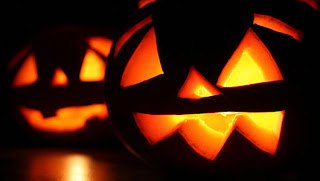 So, I'll admit it. As a kid this was my favorite holiday. Even better than Christmas since I usually knew what I was going to get anyway. But Halloween? You just never knew how it was going to turn out. What would you experience? How much booty would end up raking in? What would everyone dress up as? Would something really weird happen? What if it rained! What a horrible thought! That would have ruined everything! Still, as a kid I can't remember a single rained-out Halloween, they were all dark, relatively dry and moon-lit, or that is how I remember them.

I also remember the old Halloweens when you'd come back home with a sack bulging with great home-made sweets, before the great scare of the late 1960s after which all parents were instructed to sort through their children's bags and throw away (THROW AWAY!) all the stuff that wasn't individually packaged, that is all the great home-made stuff went in the trash and you got to keep all the not-so-great store-bought stuff. In retrospect can we possibly argue that it was the beginning of the end of community and the ramping up of corporate control . . . ?

I never understood what all the parental fear was about. Halloween was suppose to be scary, right? So why throw out all the best stuff we had amassed trick or treating (which was hard work for a kid btw) . . . ?

By the beginning of the 1970s it had all changed and had some how become common wisdom that sickos (could be anyone) were just waiting for 31 October to roll around so they could poison or seriously injure some unsuspecting kid. If you weren't scared to death you weren't a serious parent, or so people thought. I was above trick or treating age by then (which was 13 in our family) but I was still expected to take my sisters out ("only to people we know well, and check what they get!"). This I usually accomplished by talking one or two friends to go with me on my supervisory duties, which usually included trying to scare the bajesus out of the kids we were responsible for, ya know older brother stuff.

So, still kinda fun, but in a different way and nothing like it had been before. Some purists of course say that you have to go all the way back to the 1950s to get the real "old Halloween", but my experiences in the 1960s in the small town South (and once in the Midwest when visiting my mother's family in Iowa) seem to be essentially the same as what my older friends and family experienced. In all I consider myself lucky.

So what was the whole scare about?

An article from 1987 introduced us all to the sociological concept:

The cause of our exaggerated fears about children are not well understood. Social scientists might explain them by pointing to the radical transformation of the American family that has taken place during the last 15 years.

The two-career family has given rise to "latchkey children", that is children who return home from school to empty houses. As we spend less and less time with our children we have become more and more fearful for their safety.

The easy psychiatric explanation is that we are merely projecting our fears of an uncertain world on to our children. While the actual causes still remain an intriguing social mystery, there can be little doubt that there is a growing sense in America that our children are no longer safe.

One of the surprising things about the myth of the Halloween sadist is how few copycat crimes it has inspired.

The most harmful effect of the myth seems to be the emotional difficulties it has caused both adults and children. The social production of unrealistic fears concerning child safety has approached the point where it now threatens to produce an entire nation of anxiety-ridden parents, and, more importantly, a generation of paranoid kids.

What about our kids? Did seydlitz pass on this very important element of American culture to his children? I tried to, but with the kids growing up in Berlin and later in Portugal it was difficult to get the old feel, but then we also had some advantages. My wife, who had no connection with Halloween was a great help and got into the whole spirit of the thing. Also once in Portugal we joined the local American club and then had a Halloween party for the kids every October 31st. So, yes ours have hopefully happy memories connected with this "holiday".

So, what about you, fellow barkeeps and loyal readers? Would you care to exchange your Halloween experiences with us? I'm very interested to know your memories of the event and what you do today to celebrate this great American tradition . . .
Posted by seydlitz89 at 10:05 AM