My friend seydlitz recently posted an excerpt from an article in which a U.S. officer lauds the performance of the Afghan troops he has worked with."I watched them run toward the sound of gunfire..." he writes, ""...despite often having only a Vietnam-era flak vest or less to protect them. These men are Uzbeks, Hazaras, Tajiks and, increasingly, Pashtuns — former rivals now working together. They are the beginnings of a nation."And yet MAJ Lujan worries that his nation is going to abandon these hungry young soldiers; "Rather than resignation, America should show resolve...to empower those Afghans willing to lead and serve."

I don't want to use this post to take one side or another about whether the Afghan soldiers should or shouldn't get more or less support from the U.S. First, nothing I will say will have any affect one way of the other, and, second, I don't have anything near enough information about the Afghan troops involved or the tactical situation on the ground to be able to make an informed judgement about whether such U.S. investment will produce a commensurate return.

But one thing that DOES give me heartburn - and I do want to offer a comment about - is the question of how long it should and can take to create an army. 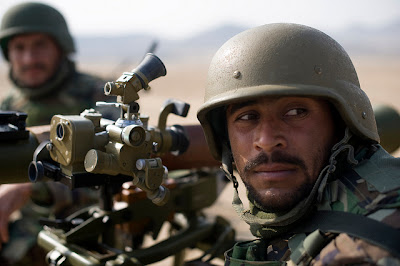 One constant meme we U.S. citizens are fed is how long it takes for the training and equipping the U.S./NATO has been doing to take effect. Overall foreign forces have been in Afghanistan for a decade. Even discarding the first eight years - which, we are reminded, were the Afghan National Army's "lost decade-minus-two" - the intensified effort to create a viable fighting force has been going on for two years.

And at this point we are informed that a thundering two out of 180 maneuver battalions in the ANA are capable of combat without direct ISAF direction.

Only...they're sort of not. "Those two “independent” battalions still require U.S. support for their maintenance, logistics and medical systems,” LTG Caldwell (commander of the ISAF training command) admitted when Pentagon reporters pressed him on Monday morning. “Today, we haven’t developed their systems to enable them to do that yet,” Caldwell said.

Now that's fine. The ANA is having a tough time getting their shit together. Sometimes you get the bear, sometimes the bear gets you, and sometimes the bear pulls your shirt over your hear, pulls your pants down and bloops you up the bunghole until the eyes pop out of your head. There are just days like that.

But can we fucking stop saying "Building up foreign armies isn’t easy."

It's not "easy". But it's not fucking rocket science, either. And because the Western publics now have very little experience with going through military training - and have NEVER had a decent grasp of history - they are inclined to believe this statement about how hard it is to build an Afghan Army and are nodding their heads rather than asking hard questions about what the hell is going on.

In fact, Western officers have relatively quickly built foreign levies into effective armies since Hernan Cortez drafted a bunch of Tlascalans to help him skin the Aztec Empire.

To take just one example. Back in 1860 the European powers were in a tight space in China. The Qing government was a shambles, and what may well have been the most terrible insurrection in history, the Taiping Rebellion, was rampaging all over the part of China that the Westerners were living in.

So a character named Frederick Townsend Ward - American sailor, filibusterer, mercenary, and general adventurer - doped up a bunch of ex-Taiping rebels and assorted random coolies into a European-style force that was eventually tagged with the awesome title "Ever-Victorious Army" by the Qings. Formed in 1861, three years later the little Army had a force of some 5,000 including infantry, artillery and even its own little brown-water Navy. Ward and his successor Charles "Chinese" Gordon, a British officer led the EVA into a series of beatings of the Taiping rebels, who were at that time the most formidable force in Qing China. The Qings rallied, the Rebellion fell apart, and the European powers continued their bitch-slapping of the Chinese "government" on their way to colonial sexy-time.

The thing is, the raw material for the EVA was no better, and probably worse, than the raw material for the ANA. And the resources Ward and Gordon had to make this rabble into a fighting force was certainly slimmer than that available to ISAF. And yet, in roughly a year - the EVA was beating the Taipings by 1862 - and certainly by two years this shake-and-bake Army was equal to or better than the toughest insurgent force in China. 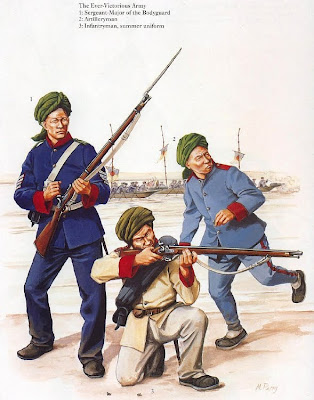 The ANA doesn't need to meet Manstein on the plains of the Ukraine, for cryin' out loud. They need to be able to execute the simplest Infantry 101 missions; security, cordon-and-search, movement to contact, combat and reconnaissance patrols. The Afghan peoples are among the fightingest on Earth, and the U.S. has organizations like the Special Forces that are supposed to be some of the finest trainers of foreign soldiers in the world.

So can we stop repeating how haaaaard it is to make an Army and, instead, start asking why is has taken so long to take a bunch of fierce fighters into...units that can fight fiercely?

Because every time we say it Fred Townsend and Charlie Gordon and the ghosts of the ex-coolies and peasants of the EVA flip us the bird in Hell.
Posted by FDChief at 9:36 AM