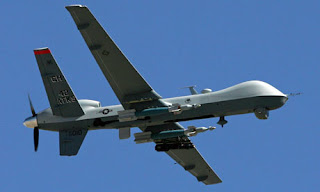 Reaper Drone (aka Predator B)

On 8 October this month, FB Ali posted a thought provoking essay on the US use of drones and how that constituted "a new kind of war" . . . Please take the time to read FB Ali's essay which sets the initial stage for this discussion.

Coming from a Clausewitzian perspective of course I take a different view and don't see where war has changed at all . . . whereas warfare on the other hand goes through a constant process of change/innovation/reaction, the interplay of technology and technique. If it looks like war is changing, then it is the political glass we are attempting to gaze through that is distorting our vision, making it seem that the process of organized violence as a contest of wills has changed when in fact it is the politics/political relations which is/are simply confusing events, making us focus on the smoke, shadows, noise and flashes which distract us from realizing what is actually going on.

Just a few questions: First, are we not talking about "warfare" and not "war"? You use the terms interchangeably in your post but are they different concepts? War is the political instrument of organized violence of one political community at odds with another. Warfare is the utilization of the means of war for a particular epoch which is in turn influenced by the political conditions/characteristics of the entities involved.

Naval warfare is "without boundaries" and submarine warfare as practiced first in the First World War, expanded the dimensions possible even further. Could we see a parallel between the submarine of 1914-18 and the drones of today in that the machine/instrument achieves a level of autonomy which could endanger/run counter to the very political interests it is meant to serve?

Submarines at the time were considered "terror weapons", are drones by their very characteristics also "weapons of terror"?

Finally does not the employment of drones attack the legitimacy of the state the US is supposedly wishing to support? The basis of state legitimacy being its monopoly on the use of legitimate violence within its borders? By condoning the use of drones over its territory targeting its own citizens, does not the host state become by definition a "failed state"?

To which FB Ali was kind enough to respond:

I think I used the two terms (war and warfare) discriminatingly. Space constraints prevented me from dealing with each separately.

The development of military robots will, in the future, create a new type of warfare, in which machines do the fighting and killing (and ‘dying’) instead of humans. To that limited extent, the development of this kind of warfare could be welcomed.

What I expressed concern about was the new type of war that these machines would make possible. Hitherto, the achievement of any significant results through military power required the exercise of considerable force across national borders, which also could not be concealed. The availability of highly capable, potent machines would tempt powerful countries to apply significant force against others without overtly violating borders, even secretly. This would invite a response in kind, if not degree, from states and even non-state entities.

If such a type of war were to become prevalent, it would tear up the present international order, and force even powerful countries to become ‘security states’.

To tie this all together allow me to make a series of statements which hopefully will indicate a coherent view:

First, drones are simply the latest and most advanced example of what technology has been able to achieve since around 1840. The development of steamships carrying cannon - the classic gunboat - and operating contrary to the elements and this type of weapon system since has provided political communities, specifically states, with this means of coercion for some time. These weapons systems allow the side with the technology to inflict pain and damage, but not to occupy or hold. There also exists a basic tension between this capacity and the achievement of the political purpose, since these systems can coerce and destroy, but only that. The British gunboat in China, the German Uboat in the mid Atlantic and the Reaper Drone over Yemen all share a basic autonomy which may or may not support the overriding political purpose. Thus there is a tendency for the capability to become the focus, not what this instrument is expected/suppose to achieve in terms of military aim/political purpose.

Second, due to this autonomy there is a tendency for this type of weapon to be seen as an instrument of terror. The simple fact that they apparently operate outside the norm reinforces this tendency. The negative propaganda associated with their presence has to be taken into consideration.

Third, the capability and character of these weapons invite inordinate responses from the side under attack from them.

For these reasons weapons of this type need to be deployed carefully with a clear intent in terms of strategy. There also exists the possibility that their employment actually creates more problems than are dealt with.

These above statements refer to these weapons as a class.

Specifically in regards to the drone wars currently being conducted by the present US administration, I have a series of specific questions:

First, specifically what military aim/political purpose are these weapons expected to achieve? How exactly?

Second, if the goal is simply national security, how does undermining the legitimacy of the host government where they are deployed, making them appear to be unable or unwilling to protect their own people, support US interests?

Third and finally in terms of evaluating effectiveness, it seems impossible to separate wishful thinking/endless claims of precision from operational security/legitimate secrecy, that is the line between foreign and domestic propaganda and/or actual reporting has been compromised. In other words, the spin is universal.

Fourth, drones are different from the other weapons of this type I mentioned above in that the future capacity for actual autonomy exists, that is there would be no human element at all. How exactly is this progress? Or is it rather hubris of a rather dangerous sort reflecting our political dysfunctions more than anything else? Given the possible flaws . . .

There is more I could add, but I'm interested first to know what ya'll think . . .

Seems that some US officials at least are worried about the unintended consequences of this weapon system . . .
Posted by seydlitz89 at 5:39 AM