So today is the first day of post-Gaddafi Libya. 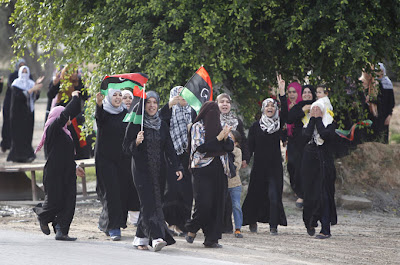 Now for the really hard part.

As the columnist for Al Jazeera reminds us:

"...the NTC has been unable to secure a country awash with armed men. Libya is also a country shot through with rivalries, jealousies and blood debts, among individuals and groups. Some of these divisions are of historic vintage, many arise from Gaddafi's rule, and the war will have added a new crop. Like Iraq, Libya was assembled through histories of empire and its aftermath. It has been torn apart by war. Now it has lost the one thing that united much of the country: hatred of Colonel Gaddafi and his regime. Libyans are left to face the legacy of his mastery of the art of divide and rule. The involvement of Western air forces meant that the rebels never had to form a unified force. Only to a limited extent did they learn the habits of cooperation under fire.

That is why they now lack an army with which to bring the country under control."

The thing that drove and still drives me crazy is the calm assumption that has dominated much of U.S. foreign policy "debate" that the bomb-y, kill-y part is the "hard part". I have no idea where this springs from - watching war films, I suspect - but it's in complete opposition to the actual conduct of damn near every war the U.S. has ever fought, where the worst fuckups always seem to spring from political gaffes made either in hope of winning the war or in post-war inattention to detail.

Thus with Libya. I honestly have very little hope for anything good. The "country" has never been well-ruled, its people have little or no experience in or proven skill at self-government, and its economy and polity are not far above the tribal level. Post-colonial experience suggests that whatever emerges will not be pretty.

But...and this is my point; I cannot see how U.S. fiddling will be helpful. It is up to the Libyans to do what they can for themselves. A "solution" imposed from outside is no real solution at all, and for all that there appear to be significant portions of the U.S. "leadership" congratulating themselves on how much we had to do with the current outcome I hope that we all recall that.
Posted by FDChief at 9:56 AM