As It Was and Ever Shall Be

Basil's posts on Occupy Wall Street got me thinking "Hmmm...didn't I write something about that..?" and eventually I went rummaging around in the back of the packrat portion of my mind and, sure enough, here it is from August, 2008.

"The Public Be Damned"

Every so often I run across something that reminds me so forcibly, so violently, of the present desuetude of our republic that I lose my wind just for a moment. 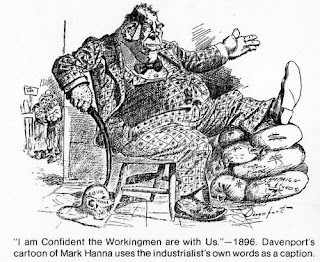 Here's Glenn Greenwald describing the scene at the current Democratic National Convention, where the telecom giant AT&T throws an intimate little shindig for the very people - imagine that - who helped them evade lawsuits for their lickspittle subservience to the criminals in the Bush White House and the NSA who believe that the laws of the land are, in the immortal words of Leona Helmsley, "for the little people". 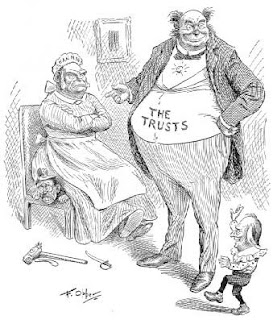 I challenge you to read it and not throw up a little in the back of your mouth. It's sickening. It's the real face of "American politics".

It's not like this is something new in American politics. The rich are always with us, and the only difference between the New Gilded Age and the Old was that back then, a man like Mark Hanna could openly say; "Come on, you've been in politics long enough to know that no man in public life owes the public anything."

Today we have to pretend to "care" about the Great Unwashed, but the reality of America is that unless we're in the top 1% of all American incomes many of us have much of the freedom of a polled Hereford being prodded up the chute towards that dark building where we await our political and economic fate. Are we better off than some Ukrainian peasant or Zimbabwean prole? Sure. Will that mean much when our job is offshored, or we get sick and run through our insurance, or the highway to our parents' falls apart and we have to drive a 40-mile detour to visit?

Here's Andrew Bacevich talking some hard, cold sense that most of us will close our ears to:

"The military-industrial complex will inhibit efforts to curb the Pentagon's penchant for waste. Detroit and Big Oil will conspire to prolong the age of gas guzzling. And the Israel lobby will oppose attempts to chart a new course in the Middle East. The next commander in chief will inherit an intractable troop shortage. The United States today finds itself with too much war and too few warriors. That alone will constrain a president conducting two ongoing conflicts. A looming crisis of debt and dependency will similarly tie the president's hands. Bluntly, the United States has for too long lived beyond its means. With Americans importing more than 60% of the oil they consume, the negative trade balance now about $800 billion annually, the federal deficit at record levels and the national debt approaching $10 trillion, the United States faces an urgent requirement to curb its profligate tendencies. Spending less (and saving more) implies settling for less. Yet among the campaign themes promoted by McCain and Obama alike, calls for national belt-tightening are muted.

Will we listen? Will we act? No.

Because, in the end, short of violent revolution, with the monetary grip on the levers of power, what CAN we do?

And because, in the end, we'd rather pretend that the future holds "freedom" and green pastures and sunny skies and try not to hear the cries of the other steers and the whisper of the killing knife. 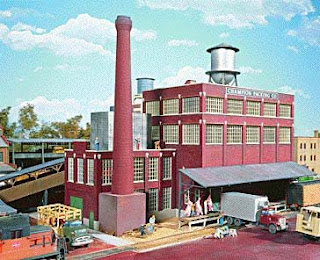 Update 10/23: I was listening to the kiddos play LEGOS and eat seaweed for breakfast (the Little Girl, anyway - anyone else have a child that likes dried nori for breakfast?) and blogreading when I came across this, from David Atkins at Hullabaloo, which is so good that I have to quote it at length. To wit:

Simply put, in the 1970s America was hit with an inflation crisis that quickly became a stagflation crisis. There were also oil shocks involved. Simulataneously, the world was becoming increasingly globalized, which made it more difficult for American corporations to compete using American labor. Finally, as Hacker and Pierson have persuasively argued, big business banded together to begin more aggressive and cohesive lobbying efforts. These four trends were devastating politically for the middle class.

American public policy on both sides of the aisle reoriented itself away from a focus on wages and toward a focus on assets. Specifically, the idea was that wage growth was dangerous because it led to core inflation in a way that asset growth did not. American foreign policy became obsessed even more than it had been with maintaining access to oil, both to prevent future oil shocks and to prevent inflationary oil spirals. Wage growth was also dangerous because it would drive increasing numbers of American corporations to employ cheaper overseas labor.

But that left the question of how to sustain a middle class and functional economy while slashing wages. The answer was to make more Americans "true Capitalists" in Reagan's terms. Pensions were converted to 401K plans, thus investing about half of Americans into the stock market and creating a national obsession with the health of market indices. Regular Americans were given credit cards, allowing them to take on the sorts of debt that had previously only been available to businesses. Most crucially, American policymakers did everything possible to incentivize homeownership, from programs designed to help people afford homes to major tax breaks for homeownership and much besides.

Low prices on foreign-made goods were also a policy priority. This had a dual benefit for policymakers: lower prices offset stagnant wages, while keeping core inflation low. Free trade deals were also a major centerpiece of public policy in this context. Few politicians actually believed that these deals would help increase wages and jobs in America. But what they were designed to do is keep low-cost goods coming into America, while increasing the stock value of American companies exporting goods overseas, thus raising asset values.

Low interest rates were also important. Renters and savers suffer in a low-interest rate environment, but borrowers and asset owners do very well. Tax cuts, of course, are also helpful in offsetting the impact of wage stagnation.

Houses and stocks, then, are assets that rise independently of wages. Low-cost overseas goods and the easy availability of loans and credit provide offsets to low wages. Low interest rates and tax cuts help as well keep assets afloat as well. The bipartisan idea from a public policy standpoint was not simply to enrich the wealthy at the expense of the middle class. The idea was to make the American middle class dependent on assets rather than wages. I was at a conference many years back, the purpose of which was to bring corporate bigwigs together in defense of free trade against what they feared might be a protectionist backlash. One executive told me point blank that if only enough Americans were invested in the stock market, they wouldn't gripe about Halliburton and other similar companies because they would say, "Hey, I own part of that company!" When I objected that that only half of Americans were invested in the market at all, and of that figure far fewer had significant assets invested, he retorted that more Americans were invested in the market than I thought, and that policy needed to be designed to push more Americans to invest.

I've often looked at our public policy and tried to figure out "What sane polity would enact policies seemingly designed to return itself to what may have been the least-stable political conditions (the openly-oligarchic period between about 1870-1930) since before the Civil War?" And here's the answer. And Atkins has a simple and exceptionally sane solution:

"The recklessness and stupidity of this sort of approach to public policy should have been proven by the 2008 financial crisis that saw the rapid destruction of asset values in stocks, bonds, and housing. Predicating economic health on asset growth is a pipe dream: most people will never have enough assets to make it work, and asset growth is far too unstable to serve as the basis for a functional economy.

America will only return to real economic health when the asset-crazed insanity of the last 30 years is brought to heel, and America returns to a public policy that is far more interested in wage growth and economic stability than it is in asset inflation. Until then, we can expect continued political and economic shocks from an angry electorate and an economy that has run off the rails due to 30 years of deeply misguided anti-inflation, pro-asset-growth ideology."

But sane or not, my skepticism remains. The wealthy have their hands around the neck of the government; they will not be pried loose. And they are no more prescient that their counterparts were in St. Petersburg in 1917 or Paris in 1789. They will destroy the village in order to save their privileges. And the extraordinary coalition that pulled our nation away from the totalitarian abyss that awaited it in 1932 - Soviet communism on the one hand, Italian (and, later, German) fascism on the other - shows no signs of being there to ride to the rescue.