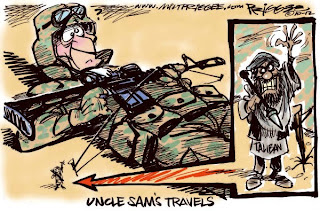 Gen. Campbell "concluded that the deaths were not the direct result of the officer's mistakes," but if not that, what did cause the deaths? Mistakes = death in combat.

The Army doctrinal formula is, "officers are responsible for everything that is done of fails to be done."

"The Army's final history of the Wanat battle largely echoes Campbell's conclusions, citing the role of 'uncertainty [as] a factor inseparable from any military operation.'

"In its conclusions, the study maintains that U.S. commanders had a weak grasp of the area's complicated politics, causing them to underestimate the hostility to a U.S. presence in Wanat."

Understanding the political situation is not relevant; an Army plans for worst-case scenarios, and soldiers are not politicians. Uncertainty is not the same as poor mission planning. Uncertainties should be addressed in the assumptions section before the Operations Order is finalized.

Poor planning caused these deaths and the failure rests at Battalion and Brigade which were derelict in this action, not at Company or Platoon level. The Commanders may have misunderstood the hostility of the locals, implying Battalion and Brigade leaders were doing best-case estimates rather than worst-case, the more appropriate combat stance.

Did the Chain of Command lack Predator feeds and satellite photos of the position for use by higher headquarters? If the assets needed to fulfill this mission were not allocated, this cannot be the result of a Platoon leader's failure. Asset allocation is a Battalion Commander function.

The responsibility for placement of the Observation Post (OP) should not be placed upon a Lieutenant. This is why the Army has Company Commanders and higher. The fight is fixed in time and space and the facts are constant. What changes are institutional efforts to justify derelict Battalion, Brigade and Company command actions.

Wanat is important because it is a microcosm of the corrupt macrocosm, which is a corrupt phony war.
Posted by rangeragainstwar at 7:54 AM