Speaking of the Koreas...here's a snapshot from this on-line album of photos taken from the last little dust-up the Koreas had this past November. 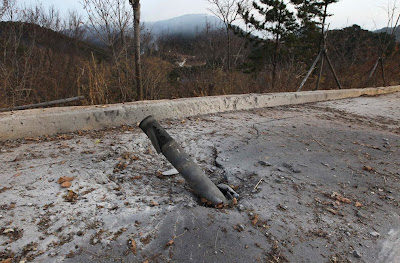 The thing I noted about this UXO projo is that it appears to be what in the USFA we'd call a "RAP round" - a rocket-assisted projectile. Given that the stated distance from the DPRK shore to Yeonpyeongdo is about 12km and the maximum range of a standard 122mm projo is about 15km, it sounds as if the KPA is looking for a smidgen more stand-off for their little game of bitchslap.

No deep observation here, just noted in passing.
Posted by FDChief at 4:25 PM