I am revising this post in light of the good work that bg and Aviator47 have done in annotating the subject addressed in the original.

The foundation was this post, in which the correspondant, an active duty soldier, complained of being told that his "Spiritual Fitness" was a problem. His - and my initial - interpretation was that this was the result of a conventional religious bias of the survey authors and reflected the influence of conventional religion in the Army. Given the well publicized religiousity of people like LTG Boykin and the USAFA evangelism crowd, this was very disturbing to me as an individual, a citizen, and a soldier.

Al and bg (see the comments section for their excellent criticism) make the point that this appears to be an effect, however, of a poorly designed survey and not a cause per se. bg examined the survey itself (which is unavailable to me) and pointed out the ambiguous questions and the linkage between things like the soldiers' feelings of inclusion in their unit and their sense of mission with their overall "spiritual" well-being. Al points out that the effect of survey questions can be extermely variable depending on the wording of the question and the surroundings of the surveyed. They both see no attempt to actively promote religion in the Army and I accept their interpretation. 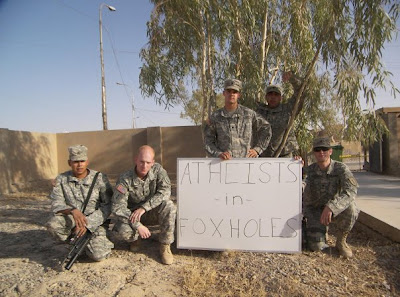 Based on their work I agree that this survey does, in fact, appear to be an attempt to determine the "legitimate concerns about the well being of the troops resulting from feelings of frustration, isolation, lack of identification with the "big picture" and so forth." as Al puts it, or, as bg explains, to "...change the organizational culture of the Army to one that encourages soldiers be introspective about their mental state and seek help when needed."

But that, in itself, raises some larger questions.

Al points out that "(s)urveys are typically conducted to measure issues of interest, for either descriptive or prescriptive reasons. More disturbing to me is the concern that the soldiers are possibly floundering from an emotional standpoint, and this is just a well intentioned (if dubiously valuable) attempt to promote self help." And certainly there is no lack of examples from human history of nations and ideologies attempting to erase moral and spiritual uncertainty towards their causes, from the god-kings of Egypt to the "Gott Mit Uns" on the belt buckles of German landser in WW2. 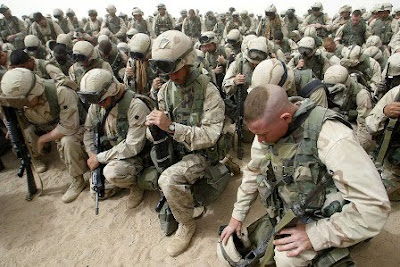 The late enthusiasm for all things "warrior" as opposed to secular soldiering, the outspoken evangelism of many officers and defense department officials, the current climate of bristling passive-aggressive defensiveness from religious conservatives still worries me. But more to the issue of this survey is; are we unintentionally creating a more-difficult emotional and moral climate for our guys on the ground in central Asia?

The public face of these wars has been a "War on Terror", that we are fighting those who "hate our democracy" or "hate our values". And yet, what we're DOING is what imperial troops have done since Cicero's day; suppressing a rebellion against a local ruler we've erected to accomplish our foreign policy goals.

I suspect that a GI in Kandahar isn't seeing a whole lot of "democracy" and "freedom" coming from the local government we're supporting. No doubt they're marginally better than the Talibs...but, still. Imperial powers have traditionally had imperial reasons for their actions. We are trying hard to avoid those reasons, while taking most of those actions. And I can't imagine that this is going unnoticed among a portion of our troopers.

I wonder; is this attempt to rearrange the "Spiritual Fitness" of these guys an artifact of the disconnect between what they're doing and what they're being told they're doing? And is the solution to adjust the propaganda? Or the policies?
Posted by FDChief at 8:16 AM