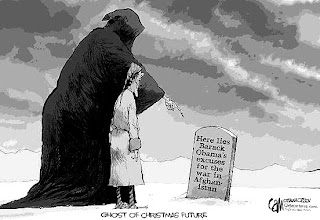 If I had a child who wanted to be a teacher,
I would bid him Godspeed as if he were going to war.
For indeed the war against prejudice, greed
and ignorance is eternal
-- James Hilton

The makers of our Constitution undertook to secure
conditions favorable to the pursuit of happiness.
They recognized the significance of man's spiritual nature,
of his feelings and of his intellect . . .
They sought to protect Americans in their beliefs,
their thoughts, their emotions, and their sensations.
They conferred as against the government
the right to be left alone -- the most comprehensive of rights
and the right most valued by civilized men
-- Supreme Court Justice Brandeis (Olmstead v. the U.S.)

A nation of warriors and fanatics,
marching forward in perfect unity,
all thinking the same thoughts and shouting the same slogans,
perpetually working, fighting, triumphing, persecuting -
three hundred million people all with the same face
--1984, George Orwell
____________________
The Medals of Honor since 2001 have been about loss and failure, moreso than conspicuous gallantry and devotion to duty which they are meant to recognize. Although the medals recognize gallantry, the gallantry is to no end. The reality is the futility and conspicuous waste of young, vibrant American fighting men, to no discernable purpose.

Smith's sacrifice saved a collection point for wounded soldiers, and SFC Smith's loss was for the greater good. All of the subsequent medals represent the failure of arms. The medals have gone to sacrificial lambs throwing themselves on grenades to save their comrades. This valor ignores the validity of their sacrifice.

The MOH's of the Special Operations Command went to Michael Mansoor, a SEAL that self immolized, and Murphy and Miller, who both symbolized exceptional courage dedicated to the completion of their assigned missions.

However, courage has become institutionalized as a symbol of defeat and frustration within a military that has become devoid of success. Our losses have become our victories; our medals symbolize a devotion to combat that has no end point and no military significance.

Historically, the MOH was a representation of hope and duty that led to victory; it has now come to signify self-immolation and meaningless death. It is not that heroic actions are not occurring -- certainly Pararescue Technical Sergeant John Chapman on Roberts Ridge (Operation Anaconda) should have received the MOH, without question. Yet despite these episodes of unmistakable heroism, fully recognized or not, the nagging question remains.

Our medals have become our Cassandras.
Posted by rangeragainstwar at 8:20 AM