I know I promised to STFU, but I came across this at Bob Farley's blog and wanted to chip in my $0.02...

This is a "Wordle" word cloud of the Bush Administration's National Security Strategy (NSS) of 2002: 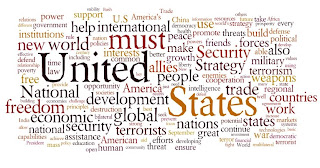 The application prepares a graphic measure of the number of times a word is used in a text. It is, then, a graph of the individual word density in the document.

Now, here is the same application product for the Obama Administration's 2010 NSS: 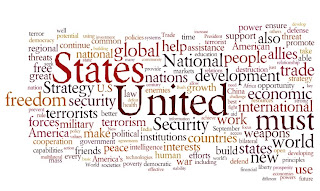 I have to echo Robert Farley - I'm intrigued by the prominence of the word "must" in both documents:

"It’s interesting to me that “must” is so big in the tag clouds of both the Bush and Obama NSS." Farley says; “Must” implies a lack of freedom; it’s much different than “may” or “can.” It seems odd that the world’s sole superpower, hegemon, unipolar state etc. thinks strategically in terms of “must” rather than “can”."

Now part of this is, I think, a subset of the U.S. military habit of stating objectives in affirmative terms ("First battalion, Empty-empth Infantry WILL maneuver to secure such-and-such by 0700 21 JUNE 2010", for example).

But another part and, I think, the more substantive part, is the purpose this document and others like it have come to play in the propagandization of and psychological warfare directed towards the U.S. public.

Because of the very condition of our adventures in central and southwest Asia I suspect that the authors of this document intend it to hammer home the cruciality and centrality of military action as a means of enforcing national will and achieving national goals. "Must" is so much less negotiable than "can" or "should". "Must" sends the message that the Evil, Scary Bad People are going to taint our precious bodily fluids now, today, and MUST be defeated even if we have to sacrifice things like civil liberties and diplomatic finesses to do so.

So where I disagree with Farley is in my interpretation of the intent of the word "must". I don't think that "...psychologically, institutionally, and politically the imperative of “must” becomes real for policymakers..." I think that the policymakers know perfectly well that we have other options. But I think that they also know that those options do not have the potential for the optimal result they wish to obtain, regardless of the strong potential for a anti-optimal (that is, not merely less than the outcome that these policymakers wish completely for but a completely antithetical result; blowback, unanticipated outcome, disaster...call it what you wish) result.

They want to convince you, and me, that theirs is the ONLY option, much as BP wants you to believe that the only choice is between continued deepwater drilling using the current means and methods - and accepting the subsequent environmental disasters such as the one we're watching - and complete petroleum depletion and the End of the Industrial Era.

Farley seems to think cynically that the powers-that-be have been captured by their own apocalyptic rhetoric. I'm even more cynical; I think that the thrones and dominations are using these semantic smoke-and-mirrors tricks to continue to supinely ignore their foolery. He thinks that our leaders are fools. I think that our leaders are manipulative bastards who are playing us for fools.

I'm not sure which is truly worse, but I suspect that neither leads to a happy land of sparkle rainbows and fluffy puppies.
Posted by FDChief at 10:55 AM