The latest pearls of military wisdom from Our Man in Bananastan:

"One aide as saying McChrystal seized control of the war "by never taking his eye off the real enemy: The wimps in the White House."

Obama agreed to dispatch an additional 30,000 U.S. troops to Afghanistan only after months of study that many in the military found frustrating. And the White House's troop commitment was coupled with a pledge to begin bringing them home in July 2011, in what counterinsurgency strategists advising McChrystal regarded as an arbitrary deadline.

McChrystal's team disapproves of the Obama administration, with the exception of Secretary of State Hillary Clinton, who backed McCrystal's request for additional troops in Afghanistan.

A member of McChrystal's team making jokes about Biden, who was seen as critical of the general's efforts to escalate the conflict and who had favored a more limited counter-terrorism approach. "Biden?" the aide was quoted as saying. "Did you say: Bite me?" Biden initially opposed McChrystal's proposal for additional forces last year. He favored a narrower focus on hunting terrorists."

That's it. I'm now officially sick of my Army's general officer corps. From Ray "The Desert Ox" Odiernio, Abizaid, Sanchez, Slick Dave Petraeus, and now this idiot McChrystal - and remember, though none of these quotes come from the Man Who Wears The Stars these are his dogrobbers, selected for their enthusiastic syncophancy and utterly craven lickspittality...if they had an independent thought somewhere in their bullet heads they would be out leading a presence patrol in West Buttfuckistan - I swear, I can't find one of these douchenozzles I'd consider capable of leading four privates to a latrine. 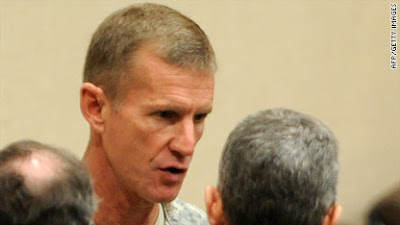 The quality of American general officers has never, in my opinion, been truly high. The officer selection process has always seemed to follow the old Japanese adage "The nail that sticks up will be hammered down". And we've had eight years of the Bush/Cheney/Rumsfeld ideal of the big-R Republican general, committed not to the safety of the small-r republic but the geopolitical fantasies of the red-meat wing of the Grand Old Party.

And here is the result.

I have no doubt that Holbrooke is a paranoid dick and Biden an interfering old nanny goat. But;

1. Our entire system is built around civilian control of the military. No doubt that George Washington and Ulysses Grant thought that their civilian masters were dicks and nannies, too. But they got it, and kept their fucking mouths shut.

2. And this entire clusterfuck in central Asia is all about civilian political objectives. Killing raggedy-assed Afghan hillmen is utterly meaningless, and if McChrystal doesn't get this - and these quotes suggest that he and his dogrobbers don't - then he's not just a problem but THE problem and needs to go, like, yesterday.

3. And the final word on this comes from my old First Sergeant Holmes, uttered when he caught me mouthing off about the political situation in Panama, circa 1986. 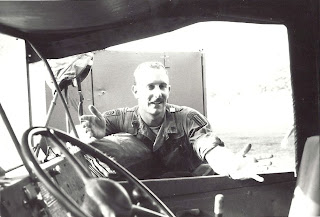 "Who da fuck elected you, sergeant?" he snarled.

"Nobody, First Sergeant." I replied.

"You gots a whole bunch of politicians folks in CONUS done elected they ass and they job to tell yo ass what the fuck you gotta do. It you job to shut yo piehole and get the fuckin' job done they tells you to do. You gots a problem with that, you can tell yo momma. But you shut the fuck up around the troops, and around the civilians. Are we Airborne?"

It seems that if we're going to keep him around we need to recall First Sergeant Holmes from his well-deserved retirement to adminster some Old Army wall-to-wall counseling to the good general and his aides.

The sooner the better.

Well. Aren't we the speshul snowflake.

I can't think of anything that demonstrates the degeneracy of both our Army's general officer ranks and the level of "geopolitical" thinking inside the Beltway.

OK, first, sir, man the fuck up and officially submit your resignation. Put it on the SecDef's desk. If he tears it up, scoop up the pieces and scuttle back to Kabul; you've won the Dugout Doug Lottery and Obama has just handed you his babymakers for the rest of his one term.

Second, Obama; this man serves at your pleasure. If you think, given the level of contempt this entire business shows (regardless of who actually said what to whom), that this man is going to execute the strategy that you and your advisers formulate, I will carry your rucksack from here to the Halls of Montezuma and kiss your fucking ass when we get there. He's a general; there's an assload of 'em, cross the river and knock on the door of that wierd five-sided office. Betcha you'll trip over one within two minutes. Afghanistan is a goatscrew - pretty much any one of them can hand over our cash to corrupt Karzai cronies and fail to figure out that killing 29-cent muj with million dollar missiles is a mug's game. Pick the first one you see. Trust me, he can't do that much worse.

So why haven't you sacked him yet?

As First Sergeant Holmes would have said; you fuck up and I will personally fuck you up in reciprocity, and if you think I'm joking, fuck up.