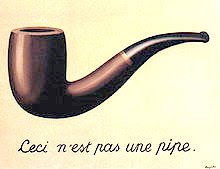 --The Treachery of Images
(This is Not a Pipe),
Rene Magritte

The territory never gets in at all. ...
Always, the process of representation
will filter it out so that the mental world
is only maps of maps, ad infinitum
--Form, Substance, Difference,
Gregory Bateson

[T]he Cartographers Guild drew
a Map of the Empire whose size
was that of the Empire
--Exactitude in Science,
Jorge Luis Borges

The map is not the Territory
--Alfred Korzybski
__________
The wars in Afghanistan and Iraq have moved beyond wars of liberation -- they are Wars of Identity.

The inhabitants of those nations are fighting to maintain their identities, and we are fighting because war has become, as Glenn Greenwald recently noted, our national identity. When non-veterans like Obama call our armed services a "warrior elite", then it is obvious we have re-defined our national ideals.

The U.S. cannot win these wars as we lack the scale to deal with them. Using military maps as metaphor, Ranger will explain his concept.

Higher headquarters, Department of the Army, Theatre, etc., use scales larger than 1:250,000 on a daily basis. Corps and Division use 1:100,000 and 1:50,000. The larger the scale, the smaller the detail, the less exact the rendering of any meaningful reality.

Maps of this scale are deceptive as they can show nothing of significance beyond gross features which are beyond the comprehension of the planners. On the news, it is common to see maps of the region which imply that we civilized, mechanical western men can impose our will on those borders, by means of animations showing movement and occupation.

That is the illusion of maps, which reflect terrain features but can never express the reality of the situation on the ground. Maps are one-dimensional, hopelessly limited representations of gross outer spaces. Maps at this level are optimistic briefing points which are easily digested. They can handily represent any illusion.

The reality devolves down to the Battalion, Company, Platoon and Section, which are operationally bound to 1:25,000 scale maps for daily use. Even though these maps show features more clearly, they still do not reflect reality.

Take any fight in Iraq or Afghanistan and look at the reality versus the map. U.S. units never move without maps distributed down to Platoon, and often, section. Now we probably have GPS in every vehicle and at Platoon level, and what good has that done?

It doesn't matter what the HQ level or the map scale. The U.S. faces implacable adversaries that have no need for maps since they use local guides, have indigenous intelligence assets and are intimately knowledgeable about their Areas of Operation. Add to this their belief that they are fighting for their identity and have no place to go except their tribal homelands and it adds up to an unpleasant reality from which maps, no matter how precisely rendered, can save us.

The Afghanis and Iraqis need no maps; they will steal and extort weapons and remain willing to delay, disorganize and deceive the foreign invaders in perpetuum. That they can do this for generations is not something that can be depicted on any map in any Army HQ.

It is all a matter of scale. The President can look at his One Over the World scale map and feel perfectly in control; meanwhile, an infantryman stows his 1:25,000 and prepares for another night of touch and go.

Wars are always a 1:1 scale.
Posted by rangeragainstwar at 4:23 PM