And speaking of General McChrystal... 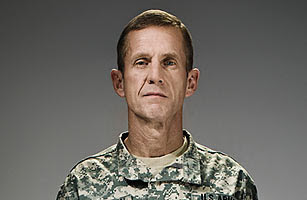 Since the man got the top job in Afghanistan, we've been slathered with accolades to his manly manliness and his warriorish intellectuality:

"...the ascetic workaholic seems to have modelled himself on a classical ideal of the warrior straight out of Herodotus or Thucydides. Eating once a day, it is said, and often sleeping little, he was noted during his time as a fellow at the Council on Foreign Relations for running 12 miles a day, part of his rigorous fitness programme conducted while listening to audio books on his iPod."

"Mastermind the hunt for Al Qaeda in Iraq and plot stealth raids on Taliban strongholds in the Hindu Kush while getting just a few hours of sleep a night, exercising enough to exhaust a gym rat and eating one meal a day to avoid sluggishness. One meal. Who was it who said an army runs on its stomach?"

"The friendship (between McChrystal and GEN Petraeus) that ensued stands at the heart of the transformation of the U.S. Army in recent years, from the world's most fearsome conventional-warfare force to the world's most sophisticated counterinsurgency force."

An uncompromisingly innovative, ruthless and manly man among men? Terror of terrorists and brilliant warrior-ascetic. It took me a while, but I suddenly realized who GEN McChrystal really was. 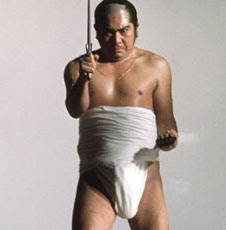 Hanzo the Razor.
I wonder if he had a bale of rice with a hole in it stashed somewhere in the ISAF HQ CONEX?

As my old first shirt would say; there's some good training.
Posted by FDChief at 9:43 PM