It's been a long time since I had to care about the minutia of U.S. Army uniform.

But every so often I come across something that pokes me right in my NCO gland.

As a species we tend to be the U.S. Army's official custodians of niggling bullshit and militarily useless fripperies; the details of dress uniforms, drill, and ceremonies being perhaps our most nitpicky symptom of that. So when I see this: 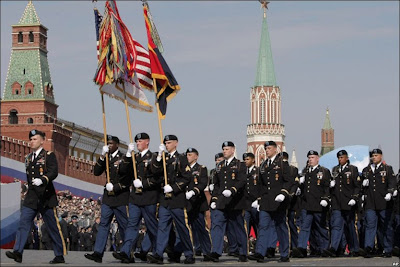 ...a U.S. infantry company marching in the Russian WW2 V.E. Day parade, my asshole old sergeant reflex kicks in and begins to ask;

1. If you're going to send someone all the way to Moscow to march, Army, why not send someone (like a company from the 3rd U.S. Infantry) instead of a bunch of yayhoos from 2/18th Infantry (and, yes, I know that the 18th landed in Normandy on D-day. Compared to the Soviet war effort, their activities at that little tea party had about as much to do with winning WW2 as the 3rd Infantry did ambling around CONUS). The 3USI specializes in useless pagentry like this, this unit doesn't, and it shows.

2. And if you're going to have them march past in their blues (which I do understand is the Army's official Class A dress uniform now) can't you at least find them their "bus driver" caps instead of that goddamn beret? 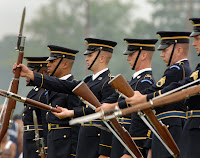 The damn thing looks silly enough with fatigues (you haven't seen a beret until you've seen it worn by an Army cook or a light wheeled vehicle mechanic - my favorite was the "jeff cap" look, where the stiffened bit with the flash is pulled down flat over the forehead) but it makes the wearer look perfectly ready to ride the short bus when worn with blues.

3. And if you're going to have them march past the Kremlin, Army, you can't march past at shoulder arms instead of sling arms, like a bunch of recruit privates? Were you afraid that the rifles would be every-which-way, like sticks in a barrel? And what does that say about the marching unit's attention to detail in preparing for this ceremony?

4. And if you're going to march past in mass formation, Army, get your D&C head out of your fourth point of contact! (Note: understanding this comment requires watching the BBC video) Either the officers in the front rank of the formation are ALL commanders-of-troops and entitled to render the hand salute for their unit (and if so, why are they together in a single rank?) or they're part of the formation and they should be executing an eyes-right. This is really a trick question - I KNOW they're not the COT because he's where he should be, at the front of the element.

The Brits and Russians look their usual dapper selves on parade, and I'm sure that the French and Poles managed to put together a couple of smart looking march units. Personally, I think that this sort of military preening is a useless throwback to the 18th Century and should be restricted to a tiny handful of ceremonial units like the 3rd Infantry. But if we're going to go to the effort to show up at one of these dog-and-pony shows, why do a half-assed job?

I feel the way about this goofy Army crap the way Lord Burleigh did about keeping a mistress; the pleasure is transient, the position ridiculous, and the expense damnable. But if we're going to do it at all, why not do it to a higher standard?

(Crossposted from GFT, a huge h/t to Jason over at Armchair Generalist, and a sheepish admission of fellow military geek-guydom in finding the pass-in-review of the operational T-34s and SU-85s pretty fucking cool.)
Posted by FDChief at 1:23 PM