Dumping on the intel...

I know I promised to back off but I saw this over at Greenwald's today and had to vent or chance losing the top of my head to a catastrophic loss-of-coolant accident.

So here's Scott Horton on the Gitmo task force report.

I note this because an old associate of ours is mentioned:

"The Obama Administration came to Washington promising to clean up the Bush-era detentions policy and make it conform to the clear requirements of law. Then it seems to have decided that the law wasn’t so convenient and that simply providing for unbridled executive authority à la Bush-Cheney wasn’t such a bad idea after all. In terms of Washington power politics, that decision seems to have taken the form of letting Robert Gates make the call on all these issues. The two figures in the Administration who took the most credible stance for implementing the Obama campaign-era promises on detentions policy -- Greg Craig and Phil Carter -- resigned within a few weeks of one another, offering no believable reasons for departing. Then press reports began to appear about secret prisons, operated by JSOC and DIA and applying rules different from those applied in the "normal" DOD prisons, including plenty of torture-lite techniques under Appendix M of the Army Field Manual"

I am hardly sentimental about most of the people we have swept up in these illegal rattissages. They are unlikely to have loved us before they were imprisoned and, probably, tortured, and they are even less likely to let us alone now. Playing catch-and-release with them is unlikely to result in flowers, rainbows and sparkle ponies in geopolitical terms. 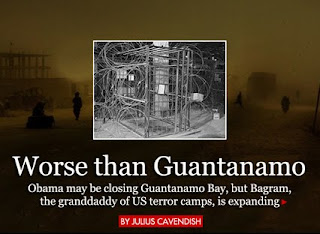 But this isn't about them. This is about us, and who we are, and who we want to be. We started by warring on nations that did not attack us. We proceeded from there to violate the spirit of our national charter, which explicitly forbids bills of attainder, imprisonment without cause, and torture. We have now arrived at a place where the Chief Bobo - the mere "executive" who is supposed to do nothing more than enforce the will of the People in Congress has issued orders to murder U.S. citizens.

And the nation's response? Either approval or unconcern.

We had this discussion so many times over at the old Intel Dump. Five, six, seven years have passed, and...what? The people who worried more about our national character, about the rule of law, about the fact that whilst our enemies have no capability to destroy us we can do just that without so much as a pistol shot fired are gone, and those who see no issue with donning the morals and methods of the secret prison and the legalized assassination are still in charge. 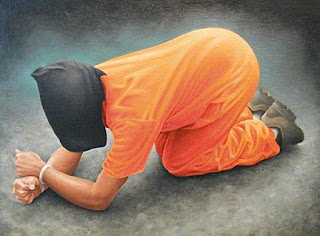 So have good intel but we prefer to dump all over it like incontinent poodles. We know better and yet we do it anyway. We have better ways and we choose to do the worse. We have the means and methods to be smarter and yet we deliberately choose to be fools. It's worse than a crime; it's a mistake, a huge, inescapable political and foreign policy mistake, and in it we are digging our own political graves, and the People seem to see nothing but a bed of flowers.