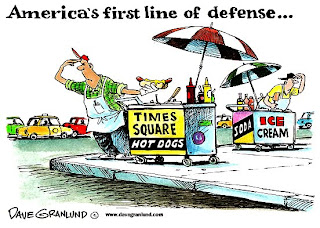 But here, cleverly disguised
as a bomb, is a bomb
--The Bullwinkle Show (1961)

I like to watch
--Chance the Gardener,
Being There (1979)
____________
Eric Holder's announcement of the foiled Times Square would-be bomber's ties to Pakistan was hailed as an intelligence victory, despite the rather large hint that Mr. Faisal Shahzad boarded a plane to that country after his would-be firework show fizzled.

Forgetting for a moment the odd fact that the car was left parked illegally at one of the busiest intersections in the country (as one source close to the investigation noted to AOL news today) -- why are we seeing a small cottage industry we might call, Bombers Manque, Inc.? The source noted:

"The Nissan Pathfinder carrying fireworks, nonexplosive fertilizer, gasoline tanks, propane and alarm clocks was left Saturday in a turn-only lane -- lights and flashers on and motor running -- in one of the busiest intersections in the world, this person noted to AOL News (Times Square Bomb: "It Doesn't Make any Sense.)"


On the same page as the original 5/5 story (Catching Bomb Suspect was Rare Moment for Holder to Celebrate) was an article stating that a U.S. missile strike killed six in Pakistan (last Sunday, 10 more were killed, and today, 14 --"U.S. Drone Strikes Kill 14.") And the would-be Times Square bomber has ties to Pakistan ... imagine that? As Gomer Pyle U.S.M.C. would say, GOL-LY!

This isn't rocket science. The U.S. is killing Pakis and Talibs, and of course, they will respond. Stimulus - Response, a physical reaction. Does the U.S. imagine they will sit on their thumbs forever in the face of such provocation?

Why does the U.S. not consider ceasing aggressive killings in Pakistan, thereby defusing their need to reactively target the U.S. homeland?

If killing Pakistanis in Pakistan is o.k., then why isn't it o.k. for Pakis to kill Americans in America?

Posted by rangeragainstwar at 6:00 PM