Even Zombies Get the Blues 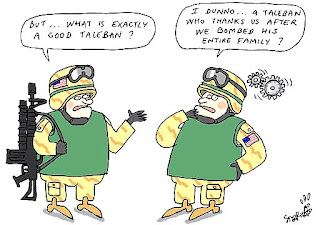 Well, you know I need a steam shovel
mama to keep away the dead
I need a dump truck
mama to unload my head
--From A Buick 6, Bob Dylan
_______________
This is about key terrain, Counterinsurgency, hearts & minds and all the dithering which we call asymmetrical warfare. Call it an exercise in everything old is new again.

One day in Vietnam, Camp Commander, Lieutenant Colonel Howard Glock (he of unremitting chart-love infamy), instructed me to periodically sweep our garbage dump, which was outside our perimeter. Our camp had a dedicated dump into which we threw our old batteries, discarded oil, contaminated oil and other sundries.

The locals habitues gleaned goodies from the trash, and this LTC Glock could not countenance.

Keep in mind before we proceed that we were a Special Forces camp with Special Operations Forces -- supposedly the go-to guys for Hearts & Minds. Keep also in mind that neither the U.S. Camp Commander or XO had the Special Forces flash (the equivalent of today's tab.) Both LTC Glock and Major Passalaigue were awarded "paper flashes" by virtue of being assigned to the unit, fairly standard for the period as SF was hard-put for warm bodies.

In a spirit of charity, it is possible that real "flashed" Commanders at other camps shared LTC Glock's and Maj. Passalaigue's Scrooge-like mentality. But as a young man who bought into the H & M creed, Ranger felt he was witnessing an aberration.

For the LTC and Major had no interest in life outside of the camp. They never visited the villages or saw how the people lived. Our efforts in SOG (Studies and Observations Group) covered the U.S. war effort. They had no positive benefits for the citizens of the supposed Republic of Vietnam.

Both Glock and Passalaigue loved their charts, briefings, clean clothes, warm food and water, and surely these two always made meal call when possible. Certainly neither spent a discernible iota of energy pondering the reality of the impoverished denizens plundering our garbage. Their only thought was to stop it, thereby denying the Vietcong access to our valuable toss offs.

Whether the VC used our garbage is debatable, but it seems incontrovertible that the people desperately needed the scraps mined from the castoffs of our bevy. This affluence was wondrous, especially considering we were a unit at war; our lives were fat city, indeed, and the surrounding Vietnamese saw this without too much effort.

But for Ranger, it seemed that here we were fighting Communism and pretending to care about the people of the Republic of Vietnam, yet we wouldn't let them root about in our garbage for salvage. It seemed a mission disconnect, then and now.

This dump was key terrain for their lives in an inexplicable war, and my leaders who were supposed to be the best in the Army failed to grasp or even acknowledge the point. As a young officer there was no way to get my point across.

Related to the dump issue was the PIR issue. We received a large shipment of compromised PIR's (Provisional Indigenous Rations) -- precursors to the LRRP rations used by U.S. troops. These PIR's had been chewed through by rats, which had left droppings in the food. A problem, but a soluble one.

Unfortunately, the LTC discovered that the camp had a 2 1/2 ton truck filled with rat-shit infested food before Ranger could handle the problem. His predictable solution was to destroy the food so the indigenous could not retrieve any of it from the dump. Ranger confesses that in direct opposition to instructions, these rations ended up in the 'ville; we traded upholstery work for our Jeeps in return.

The point is, people living in mud-floor huts were happy to eat this food, and this thought often crosses my fat and dumb-ass mind. This is the point we do not get when we disingenuously claim that H & M are our objective.

To keep the people from these rations I would have had to have thrown a Willy Pete grenade on them to incinerate the mess, and to what end? A waste of provisions and materiel.

By the end of my tour, I disliked or hated Glock and Passalaigue as much as they hated me. the only difference was, they wrote my OERs. To this day Ranger still has the taste of rat shit amongst his overflowing memories of chicken-shit duties.

Hearts and minds are never won by rifles hanging at your side. It is more closely related to three hots and a cot.

Since we were fighting Communism the thought often crossed my mind regarding what they would have done had the tables been turned. But even that thought is irrelevant since the point is it is what we do as American soldiers that is relevant.

An old retired Infantry NCO recently asked me why I hated the Army so bad. I didn't answer him, but this story gives a hint.
Posted by rangeragainstwar at 3:23 PM