Back when I was a mere girlish slip of a private, my section sergeant - one Monty Harder, career Specialist Fifth Class and field-grade alcoholic - took me aside as I was organizing myself for some sort of field problem. He inspected my uniform and equipment, quizzed me on my mission and my medical and tactical knowledge of the operation to come, and then asked me what at the time seemed to me like an odd question;

I asked what he meant by that and he explained that it meant I needed to think about what I could and should do if the mission went purely to hell; how I would get the most guys out alive, how I could spread myself and my medical treatment around as best as possible in a total shitstorm. 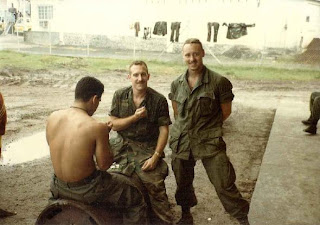 "You'll probably get killed, but you can make choices that'll get more of your guys out alive than if you don't think about it now. You need to keep thinking about that all the time you're in the field; what would I do if the enemy turned up there...where should I be if there's an ambush in that defile...where do I blow open a PZ for wounded if we get hit from over here."

This was pretty heavy tactical thinking for a PFC, and it took a while for me to get used to the idea that I couldn't just amble through the woods looking at the pretty flowers. As I got militarily smarter, it became pretty clear to me that a fair number of my fellow sergeants, and a handful of my officers weren't able to think that way, either. But Monty Harder's advice followed me a long way though my military career; never fall in love with one plan or one scheme of maneuver or one operation. Never assume the best. Always have a backup plan. Assume that the enemy is as smart or smarter than you are.

So it give me a pain in the giggy to read stuff like; "Given Karzai's track record, it's tempting to drop him and find somebody else. The problem is, there isn't anyone else. Karzai is the only president of Afghanistan, and no viable alternative seems to be waiting in the wings."

It's obvious to me that there is no chance that my country is going to stop fiddle-fucking around central Asia anytime soon. But I'd sure feel a lot happier about that if I thought that there was someone in my government who is as smart as my old section sergeant, surly old drunk that he was. 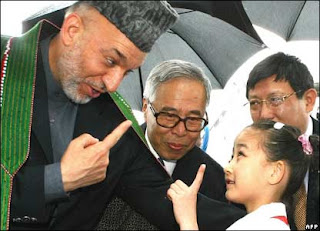 Because when you have nobody else to give you a hand, what the hell do you do if he decides to give you the finger, instead?
Posted by FDChief at 4:26 PM