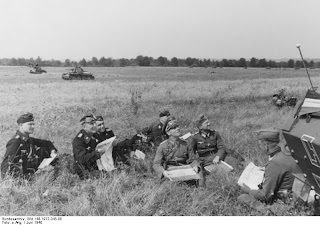 This is the third in my series of posts commemorating the 70th anniversary of the Second World War. I attempt to provide something of a fresh look at each of these campaigns (Poland, Denmark and now France) from a Clausewitzian perspective. Of the three I have attempted this is surely the most ambitious and the most difficult given its complexity. I have used two references: The first is the current standard work on the campaign, Karl-Heinz Frieser's The Blitzkrieg Legend which is the official German historical study of the campaign. The second is a contemporary French work, Marc Bloch's Strange Defeat which the great historian wrote immediately after the defeat. Whereas Frieser's work has the advantage of 60+ years of historical study behind it and succeeds admirably in separating myth from fact, Bloch's work retains the shock of the event along with the beginnings of some of the very myths that Frieser explains away, while at the same time providing insights only a thoughtful witness could have provided, those of a more timeless quality. I recommend both works.

This post is meant as only an introduction to this subject . . .

To start this post is only about the first operation of the campaign, or rather Fall Gelb (Case Yellow) which was the attack through the Ardennes, the smashing of the "hinge" of the French/Allied defense at Sedan and the pursuit to Abbeville and the coast thus encircling the entire Allied northern front. This of course trigger the evacuation from Dunkirk and the expulsion/escape of the BEF from the continent. The follow-on operation, Fall Rot (Case Red) was to push deep into France and turn the Maginot Line, but the fate of France had already been sealed by what happened between May 10-24 - a period of two weeks.

The German victory over France in 1940 is one of the most decisive victories in military history. The Germans were outnumbered in terms of troops, tanks and aircraft. The quality of some of their equipment - such as the Panzer Mark I & II - were not up to Allied standards. Yet in spite of all this, they were able to decisively defeat a numerically stronger force at the loss 49,000 dead and missing for the entire campaign (that is both Case Yellow and Red) inflicting at the same time about four times as many dead on the Allies. That is the German Army was able - in a relatively short time with acceptable losses - to knock out a major power, occupy it and exploit its economy/possessions for their own purposes.

How was this possible?

Also the proper application of new technology in certain specific instances by the Germans (as in outfitting their tanks with radios), and the lack of the same by the British and French come to mind.

Finally, what is perhaps the deciding factor was contingency, in that certain things happened at certain times allowing for this victory to be achieved. That is the momentum the Germans developed could have been stopped at various chokepoints along the line (a French attack in the Fall of 1939 against the West Wall, the bombing of the German supply chaos in the Ardennes), but were not. Simply along the way, had certain actions taken place or not taken place the eventual outcome of the campaign would have been much different. Chance, and good and bad luck all played a major role.

Frieser argues that Germany had no Blitzkrieg doctrine or operational art at the beginning of the campaign:

The thrust through the Ardennes repeatedly has been cited as a classic example of the tactics to be employed in a blitzkrieg. Interestingly enough, however, the German success was not based on any firm system. von Kielmansegg [assigned as a General Staff officer for supply to the 1st Panzer Division at the time] in this connection speaks of the 'ad hoc improvisation'. The unusual aspect of this event, he feels, is that there was no concept, there had been no 'instructions for use' that could have served as guidance. The important thing was not to translate an as yet undeveloped blitzkrieg strategy into operational-level terms. Instead, the task was to accomplish an extraordinary mission. The latter went like this, 'in three days to the Meuse . . .' All the many extraordinary methods that were resorted to here resulted from this requirement due to the situation. The experiences were analyzed in general staff terms only later and were then turned into an abstract system that propaganda journalism referred to as Blitzkrieg.
The Blitzkrieg Legend, page 137

Frieser goes into some detail to explain the evolution of the "sickle cuts" which were the two offensives (Cases Yellow and Red) (pp 61-93). Originally the German General Staff were resigned to reimplementing the Schlieffen Plan of World War I, which had failed in 1914 for obvious reasons.

The overall feeling in the General Staff was that Germany had not been ready for war in 1939 and that Hitler had led the country into disaster. Franz Halder, the Chief of the General Staff even considered shooting Hitler during some of their late 1939 meetings in an attempt to remove the dictator from power (pp 58-9). In the end Halder lost his nerve, and the generals were unable to agree on a course of action, although there remained General Staff officers who were decidedly "anti-Nazi" particularly in Admiral Canaris's Abwehr.

What changed the whole plan was a series of incidents, mostly accidental, which allowed Erich Manstein's plan to gain the attention of not only Guderian, but Hitler and especially Halder as well.

Marc Bloch's contribution is very different from Frieser's. Bloch, the famous historian, had entered the Great War as a lowly infantry sergeant in 1914, and had come out a staff officer captian in 1918. For Bloch, the First World War was always "his war" amazingly not the Second in which he was to die serving France. Strange Defeat is perhaps the one book everyone should read about this episode of history, since it speaks much about the feelings in the country leading up to May 1940. If Frieser provides the timelines, major players, military context, strategic theory perspective, the whole factual, historical side, Bloch provides the voice. Bloch is speaking to us of those times: the stupidity, lethargy, fear, confusion, terror, despair, resignation . . . the whole range of mass feeling that he experienced. Shock as in "disconnect" is probably the last sensation, everyone for themselves. For instance, "confusion" . . .

One fine morning in May, the officer in charge ran into a column of tanks in the main street. They were, he thought, painted a very odd color, but that did not worry him overmuch, because he could not possibly know all the various types in use in the French Army. But what did upset him considerably was the very curious route that they seemed to be taking! They were moving in the direction of Cambrai; in others words, away from the front. But that too, could be explained without much difficulty, since it was only natural that in the winding streets of a little town the guides might go wrong. He was just about to run after the commander of the convoy in order to put him right, when a casual passer-by, better informed that he was, shouted - "Look out! They're Germans!"
Strange Defeat, pp 47-48

Bloch transmits all these emotions. He brings up the causes as well, such as the way that French Army staff officers were trained after 1918, the French focus on having to fight a long war of attrition rather than a short decisive war of movement and the failings of the French political system during the 1930s. Reading his sorrow of how the politics of his country had become hopelessly corrupt, the pursuit of narrow interest paramount while abandoning national interests, and the loss of meaning of the very language they were using to talk about politics all ring strangely familiar to an American reading his words in 2010 (pp 162-8).

I make no claim to be writing a critical history of the war, or even of the campaign of the Nord. I have not had access to any of the documents necessary for such an undertaking, nor do I possess the requisite technical knowledge. But there are certain obvious facts which should be made clear without further delay. What drove our armies to disaster was the cumulative effect of a great number of different mistakes. One glaring characteristic is, however, common to all of them. Our leaders, or those who acted for them, were incapable of thinking in terms of a new war. In other words, the German triumph was, essentially, a triumph of intellect - and it is that which makes it so peculiarly serious . . .
p 36

Frieser points out though that this "triumph of intellect" was not across the board for the Germans, and that many high-ranking Generals failed to understand what was happening. The command and logistics arrangements for the advance to the Meuse indicate that. However, there were certain key German commanders - Guderian and Rommel for example - who understood the situation and were in positions to exploit it to the full, pushing their Panzer formations forward and leaving the German infantry formations far behind.

One last point that Bloch mentions is "synchronization" (p 78) in reference to what the British and French Armies failed to do before May 10, 1940. I think however the concept interesting as well in the interaction between the two opposing sides. Clausewitz's general theory has war going through alternative phases of tension, movement and balance throughout its duration. Should the movement phase lead to victory for one side then the interaction stops, but otherwise continues, essentially becomes a war of attrition after the (failure of the) first operation. Wars for the total overthrow of the enemy or even for more limited objectives can be won in one or two decisive operations (following Svechin here), but rarely do the political relations between the two sides allow for this. That is decisive victories of this sort are relatively rare in military history. A very complex set of circumstances has to be in place. Expanding on Bloch's "synchronization", a defender (or even attacker) who fails "to synchronize" his military means to the political conditions and the situation of the enemy is going to be at a disadvantage to an enemy who can do so.
Posted by seydlitz89 at 3:32 AM