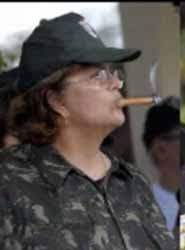 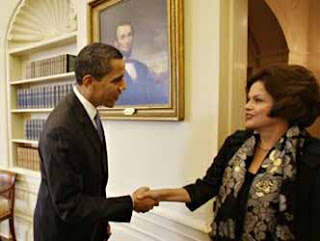 Rousseff being received by Obama
3.14.09

The true hypocrite is the one who ceases to perceive
his deception, the one who lies with sincerity
--Andre Gide

Laws control the lesser man.
Right conduct controls the greater one
--Chinese Proverb
_________________
The United States wants it known we are tough on terrorists. We don't negotiate; we hunt them down and eliminate them. They can run, but they can't hide. Yadda yadda.

Except when we choose to fete them at the White House, as in the case of Gerry Adams, Yassir Arafat and Menacham Begin. Of course, these terrorists did not target U.S. citizens, so they are o.k. The latest in this tradition is the new president of Brazil, Dilma Rousseff, except she did target a U.S. citizen, a soldier, for murder.

Ms. Rousseff was recently treated to a warm glad-handing by President Obama, but Rousseff was a terrorist and bank robber in the 1960's and 70's. She also planned the murder of American Army Captain Charles Chandler on December 10, 1968, an act accomplished in cold blood in front of his wife and child. Rousseff is a nasty piece of work, but 42 years later she navigates the halls of Washington at our President's bidding.

Why was she not arrested and tried for this crime, which has no statute of limitations? Instead, The U.S. Attorney General, the State Department and President all preferred to treat Rousseff as an honored guest. This shows that terrorists sometimes triumph and rise to the top of the political hierarchy.

The lesson here is that the future leaders of Afghanistan and Iraq will come from the ranks of those people we call terrorists, those to whom we deny rights -- they will be lionized as standing up to the capitalist occupiers. As with Rousseff in Brazil, the populations of these countries will repudiate their puppet leaders and go their own way. This is only right as democracy demands this behavior. Democracy emanates from the people and not the tip of a foreign bayonet.

As for Rousseff, if the Phony War on Terror (PWOT ©) were a real, global war, she would be treated as the criminal she is. If she remains in Brazil, fine, as the U.S. has no jurisdiction in foreign nations, but the moment she stepped on U.S. soil she should have been arrested and tried for the 1968 murder of a U.S. soldier.

It is sad that we prosecute figures like Khadr while treating Rousseff as a VIP. All terrorists are not treated equally, for if they were, she would be in a cell in Gitmo awaiting trial for her crime.

What makes Rousseff's case different from that of Omar Khadr?
Posted by rangeragainstwar at 12:54 PM