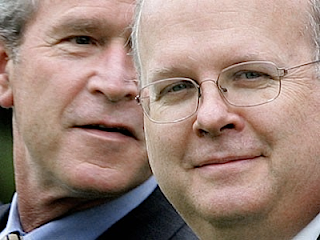 In today's Wall Street Journal, opinion section, we have a special treat. Karl Rove the master GOP "strategist" provides us with the proper mindset we need to achieve "victory" in Afghanistan . . .

Wars involve tactical shifts and adjustments. But they also involve "red lines"—and in Afghanistan, the red line must be to defeat al Qaeda and the irreconcilable elements of the Taliban, and to keep them from seizing power again.

The American and British people who are being asked to support this costly effort must know that is our objective. So must the Afghan people, who have seen much the last year to raise doubts about our resolve. And so must the Taliban and al Qaeda. America's enemies need to understand one thing above all else: They cannot outlast us and, if they try, they will be broken and defeated.

Victory in Afghanistan requires two things: the right strategy and the resolve to see it through. Mr. Obama wisely recruited Gen. David Petraeus to head the Afghan campaign. There is no one better equipped to execute a successful counterinsurgency campaign. He is both the father of the "surge" in Iraq and the person most responsible for implementing it. If Gen. Petraeus has the time and support he needs, he can bring similar success in Afghanistan.

"Similar success in Afghanistan" . . . that is the chimera of success, or ambiguously perceived defeat packaged in such a way that it can be sold to the rubes as "victory". It just might take some time though . . . like another 10-15-50 years, but as long as the money's there and the war profiteering investors happy . . . Overall there is a certain timelessness about this war view. Rove could have written the same thing in 2004, 2005, 2006 . . . Time is only measured in terms of the duration of our presence, never in terms of lost windows of opportunity, in time wasted due to incompetent leadership or even a strategic vacuum. America always gets a second chance.

Winston Churchill demonstrated that in war, words matter. They signal resolve or weakness, fortitude or doubt. Right now, the uncertain trumpet of Mr. Obama's words—those he has said and those he has chosen not to say—is emboldening adversaries, alarming allies, undermining confidence in the U.S., and dispiriting those who fight in dark and dangerous places for our security and liberty.

The president can and must correct those impressions—beginning with an unambiguous statement that America will stay and get the job done. Only the president can reassure our partners and allies, and strike the fear of God into our enemies. The world is looking for him to act as a commander in chief.

Mr. Obama has acted impressively so far on Afghanistan. He changed strategy based on facts on the ground, increased our troops by tens of thousands, and picked exactly the right man to lead our military into battle.

The president has the right pieces in place. Now he needs to signal to the world that he believes in the cause with all his heart. Let's hope he does.

So many unquestioned assumptions behind his narrative, where would one begin to unravel them? Obviously Rove considers himself an expert on this subject given his background, which also says a lot.

How about these five?

1. We are engaged with an existential threat that wishes to both harm us and take away our liberty.

2. Afghanistan is the right place to fight this threat, but not necessarily the only place. The overall war aim is one of remaking Afghanistan to suit our purposes, essentially a clean sweep.

3. We can only defeat ourselves, it is only a lack or resolve among our leaders reflected in their poor choice of words that can lead us to defeat in this war. Time is always on our side. Essentially we are "too big to fail".

5. Politics = power = war. You win by having broken the other side, having them accept your view even to their own disadvantage. Whether at home or abroad, it makes no difference.
Posted by seydlitz89 at 3:32 AM