The End of the Western Concept of War? 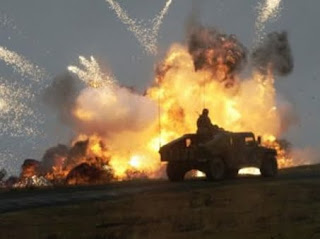 In my last post I presented a "stay the course" view in regards to the Afghan war. In this referring to Professor Andrew Bacevich's latest article, we see a very different perspective. Bacevich talks about his book here.

Both are probably seen as responses to the recent wikileaks document dump which Chief has presented on a couple of posts. While Rove's is a probable response, Bacevich's is probably not since it is an introduction to a book that will be coming out soon. That is Rove's is more a reaction imo, whereas Bacevich's is a much more thought out and reasoned presentation. Also since it is introducing a book, one should not expect the "whole story", rather one is expected to read the book, as I will.

My assumption is simply that Professor Bacevich is coming from a Clausewitzian perspective and that his argument will reflect that. This article - following this perspective - is incomplete since it serves primarily as an introduction to the book.

The article is typical Bacevich in quality and style. I recommend it highly. There is only one comment I wish to make concerning it which goes beyond the situation of the US today, and even the US situation since 1945, but that addresses the title of this post.

All of this furious activity, whether undertaken by France or Great Britain, Russia or Germany, Japan or the United States, derived from a common belief in the plausibility of victory. Expressed in simplest terms, the Western military tradition could be reduced to this proposition: war remains a viable instrument of statecraft, the accoutrements of modernity serving, if anything, to enhance its utility.

That was theory. Reality, above all the two world wars of the last century, told a decidedly different story. Armed conflict in the industrial age reached new heights of lethality and destructiveness. Once begun, wars devoured everything, inflicting staggering material, psychological, and moral damage. Pain vastly exceeded gain. In that regard, the war of 1914-1918 became emblematic: even the winners ended up losers. When fighting eventually stopped, the victors were left not to celebrate but to mourn. As a consequence, well before Fukuyama penned his essay, faith in war’s problem-solving capacity had begun to erode. As early as 1945, among several great powers -- thanks to war, now great in name only -- that faith disappeared altogether.

Among nations classified as liberal democracies, only two resisted this trend. One was the United States, the sole major belligerent to emerge from the Second World War stronger, richer, and more confident. The second was Israel, created as a direct consequence of the horrors unleashed by that cataclysm. By the 1950s, both countries subscribed to this common conviction: national security (and, arguably, national survival) demanded unambiguous military superiority. In the lexicon of American and Israeli politics, “peace” was a codeword. The essential prerequisite for peace was for any and all adversaries, real or potential, to accept a condition of permanent inferiority. In this regard, the two nations -- not yet intimate allies -- stood apart from the rest of the Western world.

Three points that correspond to the three highlighted sections:

First the Western concept of war sees war as a political instrument, that is in Clausewitzian terms. Military means becomes the instrument of appropriate policy ends. According to Clausewitz war is made up of a remarkable trinity of passion, chance and the subordination to policy/politics. War is not an independent phenomenon, but part of political intercourse, that is belonging to a larger social whole. Notice that the definition of "politics" here is intentionally broad, encompassing various aspects associated with power in the context of both within and between political communities.

Second, this is not the same as seeing war as a "problem solver" since pursuing a policy is not the same as solving a problem, which may be much more complex. One could for instance wage war in order to distract one's own population from domestic concerns, thus attempting to solve a domestic problem but using war as an instrument in a way that compromises the means and fails to consider the ultimate results of the war in question that one has initiated (chance and passion).

I think it no accident that Bacevich mentions the First World War in this regard. JFC Fuller in his The Conduct of War writes in connection with the aims of the two opposing alliances in 1914:

As regards the aims of the two alliances, which their respective policies should have co-ordinated with the means at their disposal as well as with strategical and other conditions [notice the influence of Clausewitz here], they may be inferred from the causes which brought the two alliances into being. That of France was to cripple Germany, regain Alsace-Lorraine, and reestablish her leadership on the continent, which she had been deprived of by Sadowa and Sedan. That of Russia was to absorb the Balkans, and with them gain Constantinople and an outlet to the Mediterranean, which meant the emasculation, if not the disintegration, of the Austro-Hungarian Empire. That of Germany was to prevent either of these contingencies, and maintain her supremacy. That of Great Britain was to destroy Germany as a trade rival, which she could only do with the aide of France and Russia. pp153-4

The war aims of the Entente required the complete defeat of the Central Powers. That is the political aims of France, Russia and Britain were of such a radical nature that they would require tremendous resources to achieve, to even have the chance of achieving. Given a war of this intensity and scope it was unavoidable that chance (unexpected/unintended political consequences) and passion (new ideologies/loss of respect for old elites/mass radicalization) would present themselves, making for a situation which was in many ways worse than what had preceded it.

To ensure success, what was also necessary was that the populations of the Entente powers believe they were in fact waging a defensive war, a war against an aggressive Germany. German operational success and actions in Belgium provided for the cover initially, along with ever more aggressive German war aims as their losses went up and the war went on, so that with the final defeat in 1918 Germany was relatively easily and necessarily burdened with the sole guilt for having started the war in the first place. With the overthrow of the Hohenzollern monarchy, that left the German people holding the bag. That is the "peace treaty" became a means of maintaining domination over a people, in effect continuing the war, but through other means (continued economic blockade/harsh treaty terms). The Allies - including the US - had essentially blurred the distinction between war and peace and had waged war for - especially in the case of the US - bombastically utopian goals which unsurprisingly fell far short in reality. Thus both the Allied and Central Power perspectives ceased to see war as a rational instrument, but rather as an unlimited "problem solver" which was carried over in some form in the following post-war period.

The third point I wish to bring out from Bacevich's article that I quoted is the reluctance of both the US and Israel to see the fallacy of this view. They continue to play in effect by the Entente's rules of 1914-1920. The result then as now will be a continuously deteriorating international situation with ever increasing demands on US/Israeli resources in what is a situation which does not lend itself to a military solution.

It's time we got back to the idea of limits in regards to what can be achieved by military means.

So is it the end of the Western concept of war? Not imo, but rather the realization that the wars of the 20th and now the 21st Centuries have in some cases been the result of political radicalism which expected massive social transformation through war. Thus the grandiose nature of the politics involved (in effect imposing total domination on the enemy including defining his political identity), not the potential use of the military instrument per say, is what has come to a cross roads.

Can we carry on doing things and saying things the way we have for the last nine years?

If we recall the assumptions associated with Karl Rove's view of the war on terror from my last thread:

1. We are engaged with an existential threat that wishes to both harm us and take away our liberty.

2. Afghanistan is the right place to fight this threat, but not necessarily the only place. The overall war aim is one of remaking Afghanistan to suit our purposes, essentially a clean sweep.

3. We can only defeat ourselves, it is only a lack or resolve among our leaders reflected in their poor choice of words that can lead us to defeat in this war. Time is always on our side. Essentially we are "too big to fail".

5. Politics = power = war. You win by having broken the other side, having them accept your view even to their own disadvantage. Whether at home or abroad, it makes no difference.

And compare them with Bacevich's view as presented in his latest article and recent interviews, we see that they are essentially opposites. It is as if Rove and Bacevich exist in two different worlds.

Furthermore, Rove's assumptions will not be questioned and Bacevich's questions will hardly be addressed. Instead he is dismissed politely as a "paleo-conservative" and the sham "debate" moves on. Notice that simple "conservative" has a different meaning today than before, meaning in effect "Cheney and neo-con stooge". Conservativism along with Liberalism have both been gutted as belief systems, as sets of interlocking ideals/values; today in America they simply stand for "interests" or "prejudices" those notions that relieve us of any discomfort should we get a glimpse of what is really going on behind that threadbare curtain. Some may have wondered my reason for posting anything about Rove, why? Because I have had a very uneasy feeling: as if Bush were still on his throne and Cheney still in his bunker at the controls . . . Now, why should I feel that? Could it have something to do with a possible level of betrayal and cowardice that seems increasingly manifest?

Still the basic question remains, how long can a country, even a world hegemon, continue to operate as if it were in some different reality? Assuming that its power is unlimited and that it can in effect bend reality to its own will, create its own situation on the ground? Seventeenth Century Spain was such a country and as FDChief and I have pointed out in the past, its attempt at continued hegemony in the face of material, moral and physical decline only hastened its inevitable collapse.

I support Andrew Bacevich in his attempt to reach the American people with his message. I only hope that this post, in whatever small way, has assisted him in his goal. Andrew Bacevich's warning is a flashing red light that we ignore at our peril.
Posted by seydlitz89 at 3:34 PM