A commentor going by the name of "Podunk Paul" asks: "Where are you guys? Just what the Guardian calls the biggest intelligence leak in history and you're talking about Netroots, or whatever. Your experience is needed to explain what these 92,000 military logs mean." 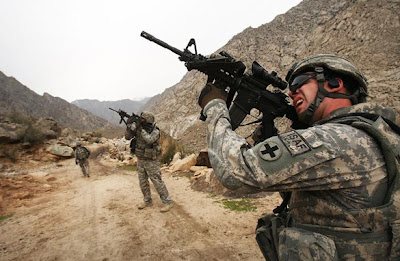 What Paul is referring to is described here as "more than 90,000 records of incidents and intelligence reports" published by Wikileaks. Including in the specialite' du maison are stuff like:

- the day French troops strafed a bus full of children in 2008, wounding eight.

- a US patrol similarly machine-gunned a bus, wounding or killing 15 of its passengers, and

- Polish troops mortared a village, killing a wedding party including a pregnant woman (supposedly in response to attacks set by or assisted by the villagers).

- four British shootings in Kabul in the space of barely a month, in October/November 2007, culminating in the death of the son of an Afghan general.

- second cluster of similar shootings, all involving Royal Marine commandos in Helmand province, took place in a six-month period at the end of 2008.

And throw in the usual drone attacks on the random wedding or funeral, black ops units topping people, sometimes including the people they were sent out to kill, and, from the other side of the hill, the Taliban SAM threat and the bloody work being done by their demo guys.

I guess my question would be...is there anyone who should be surprised by this?

Heavily armed foreigners shoot you when you approach them?

Or bomb you based on poor or nonexistent intel?

Or just fuck up?

The history of war is full to overfull, bursting with stupidity, meaningless death, mistaken killing of friends or harmless passersby. The notion that the Western nations could send fighting men into a chaotic failed state with a 30-year history of internal war and external invasion and somehow fight a delightfully sanitary, perfectly choreographed campaign was neither sensible nor likely. The idea of "fighting for their freedom" was utter nonsense that sprang, like some moronic Minerva, from Paul Wolfowitz's forehead. Afghanistan has been chaotic but never "free" in any Western sense.

How sending 30,000 grunts was going to change that is something only Dick Cheney's turgid mutterings can explain.

No, there is no "news" here, no revelation. I can't "explain" it any better than to repeat what Bill Sherman said; war is all hell, and you cannot refine it.

And, really, we should be congratulating ourselves on our restraint! Marcus Licinius Crassus Dives crucified 5,000 men and women at the end of the Third Servile Rebellion; the Appian Way from Rome to Capua was shaded with the trees bearing this wretched fruit. 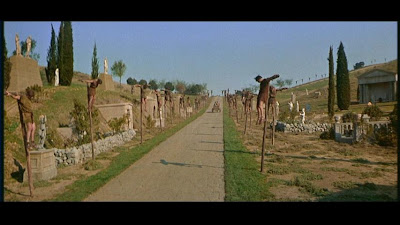 Poor Crassus, "for all his self-approval, did not venture to ask for the major triumph, and it was thought ignoble and mean in him to celebrate even the minor triumph on foot, called the ovation, for a servile war." (Plutarch, Parallel Lives)
Posted by FDChief at 9:45 PM