Taking our nukes and going home 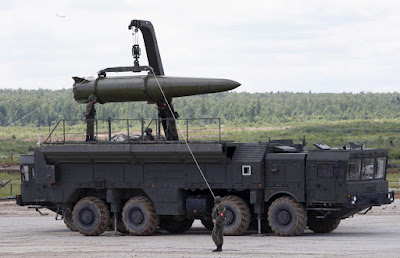 I'm a bit baffled at the tactics in play here.

"For far too long, Russia has violated the Intermediate-Range Nuclear Forces (INF) Treaty with impunity, covertly developing and fielding a prohibited missile system that poses a direct threat to our allies and troops abroad. Tomorrow, the United States will suspend its obligations under the INF Treaty and begin the process of withdrawing from the INF Treaty, which will be completed in 6 months unless Russia comes back into compliance by destroying all of its violating missiles, launchers, and associated equipment."

There's no question that the Russian Federation has been playing fast-and-loose; the 9M729 GLCM violates the 1987 INF Treaty's definition of banned weapons; "...all land-based ballistic and cruise missiles with ranges between 500 and 5,500 kilometers..."

My understanding is that one thing that worries the Russians is China, which isn't bound by the INF and has some intermediate-range missiles that the Russians would like to counter. The USN has similar concerns about the tricksy Chinese, too, and may have been pushing for this. Our old pal Bolton hates arms control treaties - ALL arms control treaties - with a hate as huge as his mustache.

So there's no shortage of players who wanted this to happen.

But, as Kaplan points out, there's a huge difference between "...Bolton go(ing) to Moscow, formally declare the Russians in breach of the treaty, and give them a certain span of time to rectify matters, warning of consequences if they don’t." and reneging on the treaty ourselves.

For one thing, how does this "punish" the Russians? I mean, unless it means that the US is going to begin a GLCM arms race in Europe, which, I'm sure, will thrill the living shit out of the EU.

If China's the US's problem, as Kaplan points out:

"...we have plenty of other weapons, nuclear and conventional, that would deter a sensible Chinese leader from aggression against vital U.S. interests. (If the Chinese leader isn’t sensible, then all principles of deterrence are null and void anyway.)"

The other point is that this treaty bans LAND-based intermediate range missiles. Ships and aircraft? Not limited.

And the biggest thing about this is that it gives away the game to the Kremlin, largely because of Trump's preceding treaty fucktardry. The guy who spiked the Iran deal, the Paris accords, NAFTA can't realistically whine about other people breaking treaties.

This simply give the Russians a free hand to do what they were doing sneakily anyway.

That doesn't sound much like the Art of a Very Smart Deal to me.