Yes, he's reliably wrong on everything and a fool, to boot, but Hugh Hewitt is hooked into the wingnut la-la land that Trump and many of his "advisors" (y'know...Coulter, the dolts on the divan at Fox and Friends, Limbaugh...) float around in, and he's on Shuck Todd's joint saying that the Trump Administration is going to get stuck into Venezuela to "bring us together".

Y'know, the way the Bushies got stuck into Iraq to unite us, not divide us.

Kaplan had the usual rebuttal, but...

I know these guy could do this. Trump, Pompeo, Bolton...they're all stupid and credulous enough.

But...would they? With the flaming-dumpster example of Iraq and Syria in their faces? (Okay, well, Bolton things Iraq was a treat, but he's dumber than a box of fucking hammers, so there's that).

Here's my thought; I'll take the under on "Trump Wags the Venezuelan Dog". 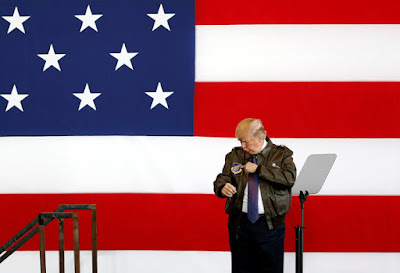 Anybody want the over?

Update 1/29: So either The Mustache of Idiocy really IS an OPSEC idiot (given the picture below - note that the second line on the yellow pad says "5,000 troops to Colombia") or he's really playing 12th Dimension Chess, or this is an just attempt to troll the fakenewsmedia. With these gomers, who knows?