You and your big mouth...

Honestly. This guy is a fucking idiot. 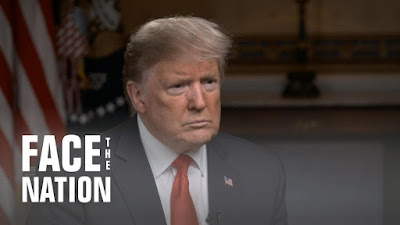 Why his policy people can't duct-tape HIS mouth shut to keep him saying this kind of stuff;

BRENNAN: But you want to keep troops there now?

TRUMP: --but when it was chosen-- well, we spent a fortune on building this incredible base. We might as well keep it. And one of the reasons I want to keep it is because I want to be looking a little bit at Iran because Iran is a real problem.

BRENNAN: Whoa, that's news. You're keeping troops in Iraq because you want to be able to strike in Iran?

TRUMP: No, because I want to be able to watch Iran. All I want to do is be able to watch. We have an unbelievable and expensive military base built in Iraq. It's perfectly situated for looking at all over different parts of the troubled Middle East rather than pulling up. And this is what a lot of people don't understand. We're going to keep watching and we're going to keep seeing and if there's trouble, if somebody is looking to do nuclear weapons or other things, we're going to know it before they do."

The cover story for the continued US presence in Iraq is to mop up the Islamic State. The Iraqi leadership made it damn crystal clear back in 2011 that they had NO interest in keeping US forces around if the latter were unwilling to sign off on a conventional Status of Forces Agreement that put the Iraqis in charge. I'm not saying I blame the then-US-government for not signing; if I was a GI I'd be scared as hell of winding up in an Iraqi court after killing someone in a traffic accident. But that ship has sailed, and to keep GIs in-country we, and the Iraqis, have to pretend. This dumbass obviously missed that memo big-time.

He probably thinks that because it's a shithole country the people there spend their time telling each other stories, but Orange Foolius apparently doesn't get that the leaders of the Iraqi legislature have televisions, too. Only they don't just watch FOX. In fact, they have people watching you shoot off your big blabbermouth on CBS, and you just told them that 1) you have no intention of leaving that "incredible base"...in other words, you see it the way the British did their colonial installations and the MNF-I did theirs when the US was officially an occupying power, that 2) you intend to use it for power projection, which is something that powers can only do with the acquiescence of the host nation, and that 3) this projection is going to be directed primarily at their ally, Iran.

I get that a plurality sizeable minority of the American people wanted this joker. What I don't get is why ANYone still wants him, when he's worked overtime to show that he's a total moron about...well, pretty much everything.