What Next in North Syria?

The Daesh so-called caliphate in northern Syria has been reduced from an area the size of Britain down to a tiny tent city.  Perhaps they will be completey eradicated by the time this is posted.  Or maybe not, as the remnants are hiding behind civilian hostages, women and children.  So the SDF held up ops to keep from harming those human shields. 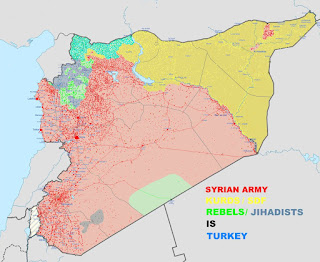 The Kurds of Syria have been battling against the Daeshi terrorists of Abu Bakr al-Baghdadi since early 2014.  Even before that in 2012 they fought against al Qaeda in the Battle of Serê Kaniyê‎ (AKA Ras al-Ayn).  Their Democratic Union Party or PYD got its start back in 2003.  Their military arm, the YPG, evolved later from the Kurdish youth in the northeast who had banded together in 2004 for protection.  Those early Kudish militias eventually turned into the YPG and  What is their goal for the future?  Moron-Don is now backtracking on pulling completely out of Syria, probably based on pushback by Senator Graham.  Or maybe by Netanyahu?

But the PYD and YPG never wanted an independent Rojava.  They and the SDF continue to negotiate with Assad and Putin for limited autonomy within Assad’s Syria (which is aggravating Trump’s Secretary of State and Tea-Partier-in-Chief Mike PomPom).  Those in the SDF wanting to negotiate with Assad include not only the Kurds but also the Christian Assyrians (AKA Syriacs)

and various Arab tribes in the north, and even a few Syrian Turcomen.  Some have split off though.  One of the original Arab tribal plankowners in the SDF, Liwa Thuwwar al-Raqqa a former FSA unit, had already left the fold in May of last year.

There are, or will be, others.  Assad is putting on a charm campaign and making promises with many of the tribes and groupings other than the PYD, even as he negotiates.  Erdogan is undoubtedly sending Turcomen kinsmen to the Seljuk Brigade to sweet talk them into defecting from the SDF.

So what is the new strategy of the SDF for the next stage, now that the geographical control and practical presence of the so-called caliphate have been ended or will end shortly?  A spokesman of the SDF’s General Military Council, at the end of its regular meeting held on the 17th of February in al-Hasakah, mentioned the following:

·         1]  Eliminate the secret military organization of IS sleeper cells through accurate military and security campaigns.

·         2] Dry up the social, intellectual and economic ground on which IS depends for the continuity of its existence.


3] Find a solution through dialogue with the Syrian Government within the framework of a unified Syria, taking into account the specificity of SDF and the constitutional recognition of the Autonomous Administration of North and East of Syria.

·         4] Solve problems with the Turkish state through dialogue and mutual respect.  At the same time, keep in full readiness to protect our areas in the event of any aggression and welcome the establishment of a buffer zone under international supervision in order to establish security and peace on our northern border.

·         5]  Liberate Afrin and return its original inhabitants to their homes and stop the processes of demographic change.

The most critical goal above is the second item.  You have to eliminate the reasons that have allowed Daeshis to proliferate.  Hard to do!  Iraq blew it, plus both we and Hamid Karzai blew that chance in Afghanistan.  Doorkickers (see the first bullet) are not enough to solve the problem by itself.

Regarding the third item, I have no doubt that the SDF and Assad can come to an agreement.  Assad needs them.  But the guy is pretty slick.  So they will have to watch out that he does not promise them one of those infamous Wimpy Sandwiches, where the meat has a fishhook and line attached.  Assad has done that previously - yanking out the meat of the deal after it was signed by the opposing faction and leaving nothing but bread or bun - or probably a pita pocket bread in his case.
.

The fourth and fifth items are incompatible.  Erdogan has already turned Afrin into a mini-province of Turkey, in actuality if not in name.  The Turkish TSK invaded Afrin a year ago during its Operation Olive Branch (talk about 'doublespeak', Erdogan could give lessons to George Orwell's Big Brother character).  The only way to accomplish the fifth item is via Russian influence on Erdogan.  Even then he will not go gracefully unless he gets guarantees from Assad and Putin that his ethnic cleansing of the Kurds from Afrin is allowed to stand.  Erdo will want Afrin to remain Arabized and Turcomanized even if the SAA is given the opportunity to defeat FSA elements there.

What of the other Turkish inroads into Syria?  I understand that the SDF may not give a rat’s a$$ about Idlib.  But they and Assad’s SAA certainly need to liberate the al-Bab/Jarabulus/Azaz triangle between Afrin and Kobani.  That is the area that the Turks annexed during Operation Euphrates Shield three years ago.  As in Afrin, Erdogan has turned the cities in that area into “Little Ankaras”.

UPDATE:   In Turkish-occupied Afrin and the al-Bab/Jarabulus/Azaz triangle the ongoing ten-month long insurgency by the YPG and other groups appears to be expanding now that the Daesh in the NE are shrinking.  And undoubtedly will increase more once the last caliphate bastion in Baghouz completely collapses.   The insurgency tactics include "IED attacks, roadside ambushes, kidnappings and executions broadcast to internal and external audiences through social media to disrupt Turkish-backed rule while signalling their tenacity and reach."   The insurgent organizations are the YPG itself, and Hêzên Rizgariya Efrînê (HRE) or Afrin Liberation Forces, and Ghadab al-Zaytoun (GaZ) or Wrath of Olives,.   There are other anti-Turkish and anti-TFSA (Turkish controlled FSA) groups. However,  those groups such as the Afrin Hawks and others are probably false flag operations by Turkish intelligence or by their jihadi proxies, since they target civilians with indiscriminate bombings.  They have been publicly disavowed by the Kurds and the YPG has rejected involvement in those bombings of public places.

From late March through the end of January 2019 the YPG, GaZ, and HRE claimed responsibility for 220 attacks on Turkish occupiers and Turkish-controlled-jihadis.  The attacks by HRE just started in November as the YPG attacks appeared to be ramping down; so speculation is that they (HRE) are a front group for the YPG.  Possibly true as HRE is using ATGMs, sniper rifles, and other weapons thought to be in the YPG arsenal.  Incident map and figures from Alexander McKeever.


There is also speculation that GaZ is a YPG front group.  Perhaps so?  However GaZ uses tactics like kidnappings and assassinations.  Not just of Turkish and jihadi occupiers but also of collaborators.  In my opinion they act more in line with a black ops group similar to the KGB's 13th Directorate or the CIA's Special Activities Division.  They could be a special forces unit of the YPG like YAT Anti-Terror Units which were reportedly trained by the CIA and US SOF?  Or they could be an armed wing of the Turkish MLKP Marxist-Leninist Party.  Or a special branch of the Afrin Asayish Police Force.  Or one of the Arab NDF militias in Afrin - note that many of the GaZ attacks (blue) are in the alBab/Jarabulus/Azaz triangle where there is a larger Arab population than in Afrin.  Perhaps a combination or merger of all or some of those groups.  Or even a branch of one of Assad's many Syrian Government intel & security agencies.  Interesting that the Director of Syria's Mukhabarat, Mohammed Dib Zaytoun, has a name that is akin to Ghadab al-Zaytoun.  But that is much too obvious I would think.  Unless Assad is sending Erdogan a message.

The United Nations Mission to Syria has finally gotten off their butt and is now reporting on the war crimes committed by the Turkish controlled jihadis in Afrin.  Specifically mentioned are the following:  Ahrar Sham, Liwa al-Amjad, Failaq Sham , the Nuxba army, Sharqiya army, Shamiya front and Nur al-Din Zangi (AKA Zinki).  All of these armed groups are headchoppers and some are, or were, liver-eaters and child killers.  As bad as the Daeshis.  Some consider them worse, as at least the Daeshis followed Sharia law, while these groups are now completely lawless and practice rape, robbery, ransom, torture, and murder.

Probably took the UN so long to sit on this because of pressure from Turkey.  And even now they just 'suggest' that these groups are controlled by Turkey.  And they make no mention of Erdogan's ethnic cleansing in Afrin.